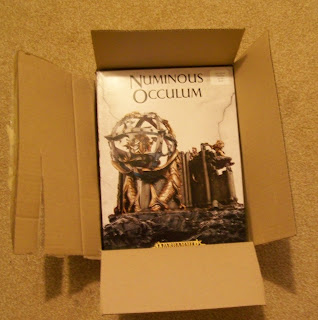 The biggest news in the wargaming world over the last year has been the release of Warhamer: Age of Sigmar, or the destruction of the Warhammer Old World, depending on your personal feelings about it all. I actually don't have any strong feelings about it. I liked the Old World well enough, but I didn't play the game and only rarely bought any of the figures. I think it is clear that Games Workshop had to do something in order to preserve fantasy as a core part of their business, and so they went with a bold new redesign.

I haven't read the Age of Sigmar rules or played a game, so I can't really comment on it. However, I am a big fan of some of the terrain kits that they have put out for it. I think they are some of the coolest, most interesting fantasy terrain pieces I have seen in a long time. Some of them, dare I say it, would look really good in a game of Frostgrave. In fact, I have been so struck by the terrain that I recently ordered my favourite, the Numinous Occulum (great name). I ordered from Firestorm Games as they had a competitive price, and they have been a good supporter of Frostgrave. My order came quickly and well packed. 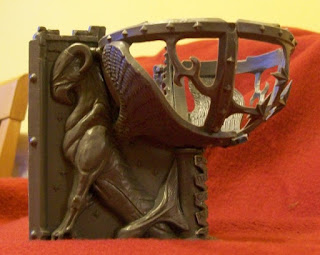 The kit comes with four sprues of pieces, all of which are cast in heavy plastic. I have no doubt they will easily withstand the rigours of the gaming table. I started assembly while watching the new Godzilla movie. Assembly required a lot of clipping, cutting and filing. I've probably put in about an hour's work all told, and I would guess I'm a bit less than halfway done. That said, it is look pretty cool so far. What the picture here doesn't related is just how big a piece it is. I suppose it is designed for the new, extra-large Age of Sigmar figures, which means for standard 28mm figures, it is a big piece of terrain. I'll try to get a shot with a figure in it next time for scale purposes.

So far, I'm really pleased with the kit and look forward to getting some more work on it.  I might even have to write some Frostgrave rules for playing with such a terrain piece.