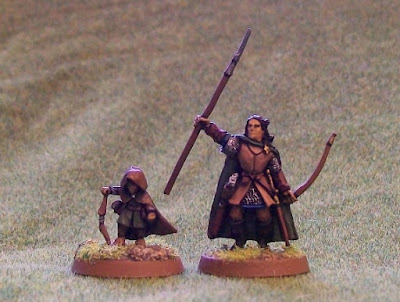 Did you know that in the earliest drafts of The Lord of the Rings, the character that would later become Aragorn was actually a hobbit ranger with wooden shoes named Trotter? I'm not kidding, you can read all about it in The Return of the Shadow (The History of Middle-earth vol. 6) by Christopher Tolkien. Thankfully Tolkien thought better of this idea, and Trotter was consigned to the literary dustbin. Still, there is nothing intrinsically wrong with the idea of a hobbit ranger. We know for a fact that hobbits due produce the occasional adventurer.

The hobbit ranger seen here is my latest completed figure (and the only figure I have managed to paint in some weeks). Although he's a Reaper Miniature, sculpted by Bobby Jackson, I think he fits in pretty well with the Games Workshop, The Lord of the Rings ranger standing next to him.