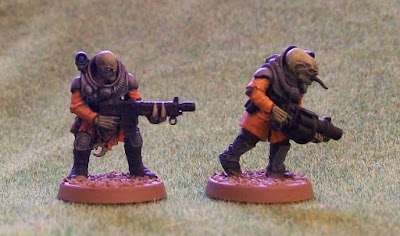 Finishing up that Space Wolf encouraged me to do a little more painting on the Death Watch: Overkill set. Not wanting to tackle another time consuming, heavily detailed marine, I grabbed a couple of genestealer hybrid models and got to work.

I don't want to spend huge amounts of time on the hybrids. They are cool models, but there are a lot of them, and they are essentially a 'horde of bad guys', and not really worthy of a lot of attention. (Also, as near as I can tell, they don't stay on the board very long in the game, as they are weak and crunchy!). I have a bunch of genestealers from previous games, and I have painted all of them using a colour called 'Middlestone'; it is sort of a muted, yellowy green. It was apparently a colour used by the Germans to paint some of their tanks in World War II, at least that is how it came to end up in my paint box. I thought the colour worked well for alien-insect monsters. So, wanting to keep my hybrids tied to my 'pure' genestealers, I used middlestone for the hybrid flesh.

Left to my own devices, I probably would have never thought of using orange as the basis for their suits. Orange is not a colour I use very often, but I saw someone else use it for his hybrids and thought it looked pretty sharp. Also, it fit well with the idea that the hyrbids are asteroid miners who would wear hi-visibility suits.

As you can see, for their armour, I just went with a grey drybrush and their guns are a pure flat black. I think they came out well, considering how much time I spent on them.

I mentioned in my last post, that the Space Wolf was closer to a true scale model space marine. Well, here he is next to the two hybrids...