A few weeks back, I ordered a copy of the new Middle-Earth Battle Companies rules from Games Workshop. I was supposed to have my first game today, but that had to be cancelled because it is too dangerous to walk out my front door. An hour ago it rained for 10 minutes and left a deadly layer of nearly invisible sheet-ice over everything. Oh well, we rescheduled, and I will just have to blog about my Battle Company instead.

With her son Breged off on his quest, Princess Ivriniel of Dol Amroth is forced to turn to others to fulfill the dangerous secret missions that do so much to keep Dol Amroth and Gondor safe. Instead, she has turned to Belagus, the son of a distant cousin and a loyal knight. For years Belagus fought on the front lines against the growing power of Mordor, battling side-by-side with the Swan Knights of his order. Around a year ago, Bealgus suffered a severe wound, one from which he was not expected to recover. Despite this prediction, the skilled nurses in the Houses of Healing brought him back from the brink, and eventually he was sent home to complete his recuperation. Back in Dol Amroth, he came to the attention of Princes Ivriniel, and the two spent many hours talking politics, philosophy, and military strategy. In this way, Belagus entered into the Princess's confidence, and when he was fully recovered, she recruited him into her special service...
--------

As soon as I got my copy of Battle Companies, I knew I wanted to make a Dol Amroth company. The Swan Knights have always been one of my favourite parts of The Lord of the Rings, and I quite like the figures that Games Workshop have produced for them.

Dol Amorth (technically 'Fiefdom') Battle Companies are all lead by Swan Knights, which is appropriate and what I wanted anyway. I am not the best at painting armour, but I really took my time with Belagus, trying to work his armour into a glorious shine. Otherwise, it was a very simple figure to paint, and the results are mightily pleasing.

Next the Dol Amroth Battle Company calls for two 'Men-at-Arms'. This immediately presented me with several problems. First, I didn't have any 'Men-at-Arms', and while I could have ordered some, I didn't want to, for two reasons. First, you can only get Men-at-Arms in finecast, a material I avoid whenever possible, especially if the figure features a long bendy weapon, such as a pike. And there was my other problem. I hate pikes on miniatures. They are just awkward. Plus, I'm building a battle company that currently has 5 guys; why would two of them be carrying pikes? I guess that might make sense if they were on a ship (a definite possibility for Dol Amroth), but at any other time, just about any other weapon would be more practical. 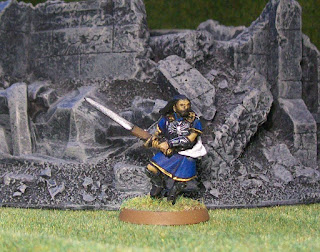 I solved this problem in two different ways. For my first Man-at-Arms, I used a Minas Tirith Citadel Guardsmen with a spear. By changing out the traditional black for Dol Amroth blue, the figure fits right in. The spear is close enough to a pike without the super annoying storage issues, and, best of all, I already had the figure on my lead pile waiting to be painted.

For the other Man-at-Arms, I decided to trade him out for a Clansman of Lamedon. Well in my case, a Warrior of Dol Amroth who favours a big two-handed sword. As far as the rules are concerned, this switch is kind of semi-legal. There are two ways to assemble companies in the game, and I'm kind of mixing them. Anyway, the Clansman is, for the most part, a less powerful figure, and my opponent agreed, so there you go. Plus, I had this figure, which I painted several years ago, ready to go! 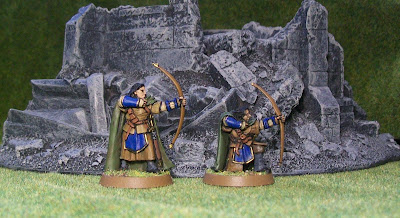 Finally, I needed a pair of archers. I had an old 'Faramir's Ranger' figure lurking at the bottom of my lead mountain. He has honestly been there for years, and I don't know why I haven't painted him. Well, I did, and in fact, I enjoyed it so much, I went to Ebay and bought a second one to finish off the company.

So here's Belagus and his boys. Hopefully we'll be hearing more about their adventures in the near future!

(The only thing I don't like about this Battle Company - Belagus is bravely pointing one way with his sword, while every other figure is facing the other way!).
Posted by joe5mc at 05:44