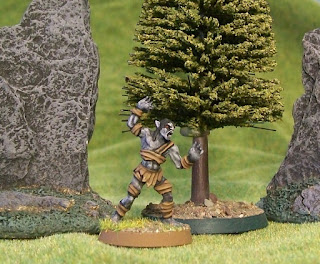 Just finished painting this little ghoul, another terrific Bobby Jackson sculpt. This figure was created to do double-duty as ghouls appear in both Frostgrave and Ghost Archipelago. In fact, if I really stopped and looked, I suspect I have included low-level undead creatures (skeletons, zombies, and ghouls) in a disproportionate number of the scenarios I have written.

I think I have just always considered these creatures the perfect bad guys. Not only are they inherently horrific, but, because they are literally soulless, there is no morale ambiguity in their destruction. Since they are anti-life, taking one down is winning a victory for life itself. They aren't misunderstood, or the products of bad childhoods, or just killing people to try and feed their children. They are just bones and corpses trying to make more corpses.

Anyway, a quick a figure to paint, as it really features only too main colours, although this did make it easier to concentrate on getting some good layers and highlighting, which I think really make the figure pop.
Posted by joe5mc at 05:56