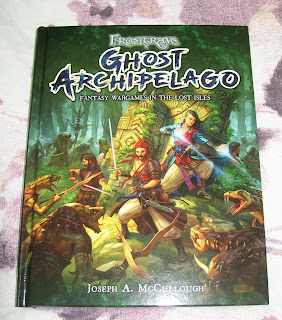 It was a good day for Frostgrave: Ghost Archipelago yesterday, as it was short-listed for the UK Games Expo Awards in the Best Miniature Rules category! Two years ago, Frostgrave won this same award.

That said, as good a day as it was for me, it was an even better one for Osprey Games, as they published all three titles that were short-listed in the category!

Also vying for the award are Gaslands by Mike Hutchinson and Kobolds and Cobblestones by Rob Burman. I am lucky enough to have met both of these guys on several occasions, and I can honestly say that they are both really dedicated wargamers and fun to hangout with. I think both of their games have brought something new and fresh to wargaming. Gaslands, especially, seems to have caught the popular imagination as it has given wargamers everywhere an excuse to buy and convert hot wheels and matchbox cars!

The winners will be announced at UK Games Expo in Birmingham in early June. Unfortunately, I won't be in attendance this year due to family commitments, but I have often thought it one of the most genuinely fun conventions in the UK.

Well, good luck to all of the nominees, but if you are going to Games Expo, vote Ghost Archipelago!
Posted by joe5mc at 03:59