With Frostgrave: The Maze of Malcor just around the corner, I thought I would share a little piece of the new book that I think will be of great interest to many players. As I have mentioned elsewhere, the book includes some rules updates, including a new Experience Table.

The experience table has probably been the most controversial piece of the game since its release, and I have probably spent more time thinking about it than any other aspect. I could tell by the reaction of many players that it needed work - not specifically because it was unbalanced, though you could make that argument, but because it was interfering with too many player's enjoyment of the game.

So, I studied the games that I played, or saw played. I canvased opinion here on the blog. And, finally, I created a new experience table. Here it is. 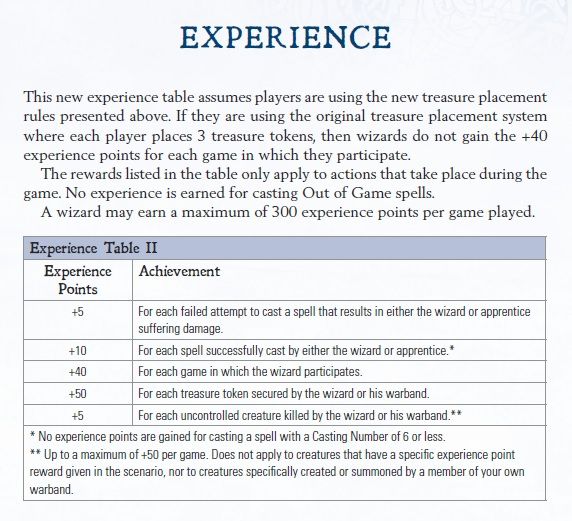 So what is different about it? Well, the biggest difference is that I have removed all of the experience points for wizards killing other wizards, apprentices, and soldiers. Not only was this rule generally unpopular, but it was leading to occasions where a wizard could have a huge game and gain 5 or 6 levels. While this is unlikely under the new table, I have also added a rule that caps experience gain at 300 xp per game.

Otherwise, I went with one overriding principal - keep it simple. I went through lots of different methods for experience gained for casting spells, but most of them added complexity without really adding any enjoyment. So, there are only two minor changes to that. Players now receive 5xp when they cast a spell that damages the spellcaster (learning through mistakes) and they no longer receive any xp when casting a spell with a Casting Number of 6 or less (you've learned most of what their is to learn by then).

Finally, wizards now get 40xp just for showing up, which is partly to maintain balance as wizards progress, and partly to make up for the fact that under this new system there are only 5 treasure tokens on the table.

Anyway, I hope players like it, but, if not, feel free to keep using the old system, or whatever home-brewed system makes you happy.
Posted by joe5mc at 07:22