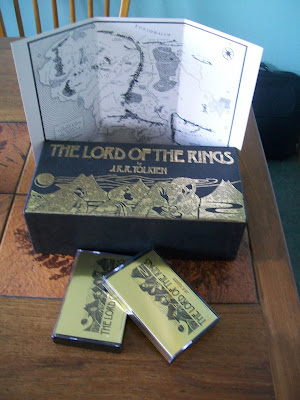 A few months ago, my friend Nick Eyre was extolling the virtues of the 1981 BBC Audio Drama adaption of The Lord of the Rings. I walked away from the conversation promising that if I ever had the chance to listen to it, I would.

Well, today I was nosing around an Oxfam charity bookstore, when I found the pictured box set. It’s a rather attractive box, in really good condition. The thirteen cassette tapes inside, each containing an episode of the drama, are also in good condition. It even comes with a small, but high-quality reproduction of the map of Middle-earth, so you can follow the path of the adventure as you listen. With a price tag of £10 (and much of that going to charity), it was more than my Tolkien-obsessed mind could resist.

I am especially attracted to it because Ian Holm, who played Bilbo in the Peter Jackson adaptation plays Frodo in this one. I’m sure that is not a coincidence.

There is only one problem… I don’t own anything that can play an audio cassette, and haven’t for at least 15 years! It’s the worst kind of purchase – something that requires another purchase to actually use! Well, I’m going to ask around of my friends and relatives to see if anyone has something I can borrow. If not, it looks like they are neither difficult, nor overly expensive, to obtain on ebay.