Giant Flies across the Multi-Verse! 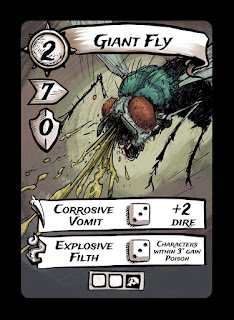 Now, I know what you are thinking, those giant flies are kind of cool, but what use are they beyond a few scenarios in Rangers? Well, I agree. If you are going to buy some flies, and spend the time painting them up, you ought to be able to use them for at least a couple of different games.

With that in mind, I asked a few of my fellow game designers if they could help me out. And so, presented here are rules for using your giant flies in games of Relicblade, Scrappers, This is Not a Test, Ragnarok, and Last Days!

Sean went above and beyond and created an illustrated card for Relicblade players that want to include giant flies in their game. If you click on the illustration above, it should be large enough to print out.

It seems to me that giant flies fit perfectly in the Scrappers setting with all its mutant life forms running around. Of course, I didn't expect the radiation beams from their eyes!

Deep in the most irradiated parts of an Omega Zone lie nests of Zone Flies. Steeped in hard radiation, these large mutant flies zip around the ruins shooting dazzling beams of deadly radiation from their multi-faceted eyes. Fortunately for their prey, they aren't alive to witness how they are then devoured... 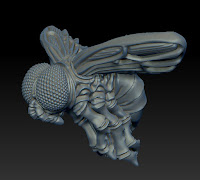 Although it has just been released, it is never too early to add new monsters to your games of heavy metal Viking combat!


Across the Fractured Realms, bodies of the dead are piled into great heaps of flesh and blood that dot the war-torn landscapes. Found swarming within these putrid battlefields are flies of immense size that feed and breed amongst the corpses. Over time, Nidhoggr’s Corruption has seeped into the remains of the dead, transforming what were once normal flies into these monstrosities that can be found today. Giant Flies are about the size of a human infant with wings that also possess an insane spark of intelligence that sets them apart from their tiny mundane counterparts. While more of a pest than a threat, Giant Flies can be dangerous who dismiss them. Their bite contains a myriad of diseases and sickness that can fell even the mightiest of warriors who choose to ignore the wound.

This is Not a Test by Joey McGuire

In the event of the apocalypse, I feel pretty sure that flies will also survive…just maybe not in their present form. Thankfully, Joey McGuire, the king of the wasteland, agreed!

Buzz Fly
A common wasteland nuisance, buzz flies are large mutated houseflies found in every part of the wasteland. Drawn to garbage piles, carrion, and the fecal droppings of larger wasteland predators, when buzz flies gather in large numbers their incessant wing movements create a discordant buzzing noise or droning than can drive any wastelander to distraction. While not particularly dangerous singly, buzz flies are almost always found in large groups, and they can become agitated if disturbed or attacked.

Fighting zombies is all well and good, but occasionally, you might want to mix it up and fight a huge swam of flies instead. At least that’s the conclusion that Ash Barker came to, when I asked him to help out! You can also download Ash Barker's rules here. 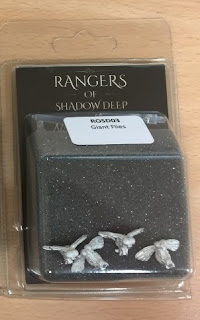 After a strange aurora in the sky, the people of Prospect, Alaska wake to a beautiful crisp day on the edge of the world. Summer is beginning to push the snows higher and higher up the mountainsides and the sounds of birds, animals and insects are returning to greet the townspeople with the morning sun.

As the air grows warmer however, a strange buzzing fills the air. The aurora appears to have had some strange effects on parts of the animal world, in particular the millions of flies spawning in the foetid melt-water.

Brace yourselves, grab the nearest handy weapon and prepare to survive the onslaught of THEM!

In conjunction with the great new Rangers of Shadow Deep Giant Flies being released from North Star, Joe thought it would be fun to smash together some rules for these horrible foes in other game systems. Never one to pass up the chance to write something for a classic-camp horror movie this micro-supplement obliges that impulse.

So without any further-ado, I present a new Menace for Last Days. In all respects these monsters replace the Zombies as the ‘foe’. Any Zombie-Related references should be replaced with Giant Fly related references instead.

Big thanks to Joe for the invitation to do a Guest Spot! I’ve been slowing amassing a catalogue of ‘Optional Menaces’ for Last Days as the nucleus for another expansion and this was a fun nudge to get one done!
Posted by joe5mc at 02:46