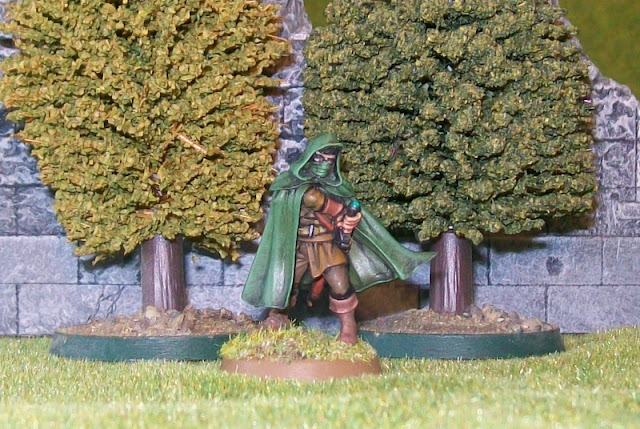 Back in the excitement when Frostgrave was first released, I thought to myself, 'I am going to paint every figure that is released for the game!' Of course, by the time the dust settled, the original release for Frostgrave included around 40 metal figures, a slew of treasure tokens, plus a box set of 20 plastic soldiers. Considering my average painting speed, I was doomed at the start. Since then, it has only gotten worse (better).

However, with Rangers of Shadow Deep, the initial release includes only 5 different figures, and one of those is a fly! This is my chance, if I can move quickly, I can paint the entire range! With one figure already in the bank, I started in on this guy.

I absolutely love this figure. It is based very closely on a piece of Barrett Stanley artwork in the book.

For whatever reason, it is relatively rare to see figures in the act of drawing a weapon, but it gives this figure a wonderful sense of impending action. Also, there is something about that cloak swirl!

I painted him in very traditional ‘ranger’ colours. In fact, I think you could drop him straight into Middle-Earth or Magnamund and no one would bat an eyelid.