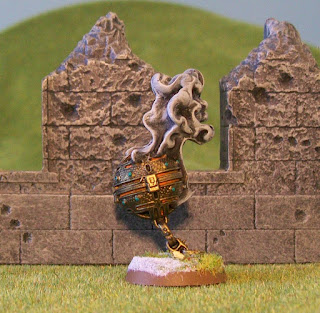 It’s a well-known fact that artists often have a hard-time sticking to the brief. Such was the case for Bobby Jackson when he came to sculpt the starfire elemental for Maze of Malcor.

Basically, a starfire elemental is just a big ball of floating fire. Instead of that, Bobby sculpted a floating metal sphere, burning with internal fire, and smoke pouring out of it. I love it. It doesn’t match the description at all, but it’s just such a cool figure.

In the end, it was decided to use this figure and sculpt the more accurate version and include them in the same pack. I think it was the correct decision.

The starfire elemental is technically a creature, but in truth, it acts more like a spell effect. Soon after it was released, Games Workshop saw the model and stole the idea for their entire range of ‘EndlessSpells’. (Okay, that’s almost certainly not true, but I figure a little GW controversy might help sales!).

It was a fun, quick paint (except for trying to paint in the small, flaming cracks in the sphere), and it looks fantastic on the tabletop!