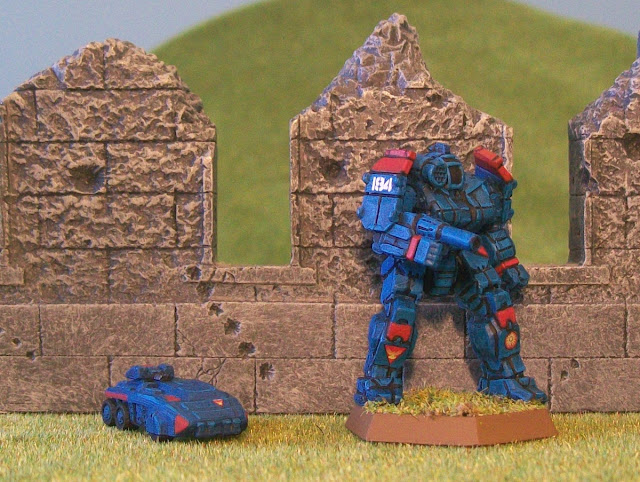 I recently purchased, read, and enjoyed Battletech: House Arano, which interestingly appears to only be available through DriveThruRPG. It’s a source book based on a recent Battletech video game. I know next to nothing about the video game, but the book was a fun read, none-the-less. It covers the previously unmentioned periphery state, the Aurigan Coalition. 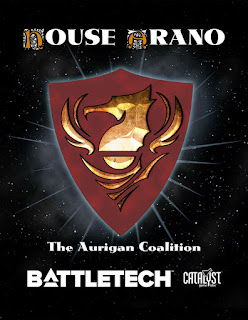 It is very easy to get lost in the vastness of the Battletech universe, so it’s nice to sometimes see these self-contained books, which presents a smaller setting, with all of its notable personalities, and give a few scenarios to play.

Anyway, it got me in the mood to paint a mech, so I pulled a Griffin out of the ‘lead box’ and slapped some paint on it. He’s the newest addition to my Firehawks legion – you can see the unit’s emblem displayed proudly on the left leg.

At the same time, I painted up a little APC. It’s a nicely detailed model from Strato Minis – kind of like a sleeker version of the APC in Aliens. It’ll be useful for moving around VIPs or maybe special strike teams.

Of course, all of my Battletech reading and painting is somewhat overshadowed by the massive Battletech kickstarter that is running. It’s already well over $1,000,000, which is doubly impressive with only just over 6,000 backers.

I am not one of those backers. I looked at it, and looked at it again, and again, but I just couldn’t see a reason for me to back. I have no need or interest in the core ‘Clan Invasion’ box set. I’m not much of a fan of the ‘Clans’ as a concept, and most of their mech designs, even the new, admittedly much improved, versions, leave me cold. It looks like there is going to be some awesome new mechs coming out of this kickstarter, but they don’t need my money to help with that. 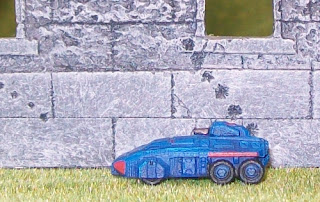 Most importantly, nothing is going to be delivered on the kickstarter for a year, assuming it stays on schedule. I have no idea what I’ll be interested in at that point. Maybe it will be Battletech, in which case I’ll buy some of the new mechs when they come market. If not, I’ll just wait until the mood hits me again.

This is not to put down anyone who has backed the campaign. If you are a long time Battletech player, you can probably feel pretty confident that you’ll be excited about the new stuff whenever it arrives. But I run hot and cold on these things, and if it hits me when I’m cold, it’ll all just get chucked into a box, which isn’t much of an investment.
Posted by joe5mc at 06:19