I couldn’t decide. Should I pack my Frostgrave warband in my carry-on luggage or my checked bag?

It was Saturday night, and I was in a hotel just across the road from Gatwick airport. Early the next day, I would be off to Tallinn, capital city of Estonia, for the Geek Nations Frostgrave Immersion Tour. On one level, I still couldn’t believe it was actually happening. Of all the wonderful things that have occurred since I wrote Frostgrave, this seemed the most improbable – a week of travel, exploration, gaming, and feasting along with eleven other Frostgrave enthusiasts!

From London, it is about a 2.5 hour flight to Tallinn, and it passed without incident. In fact, the only pause I had in the trip was when I came to passport control. It was the day after Brexit, and the UK was no longer officially part of the European Union. On the other hand, I’d heard nothing would actually change until the end of the year… so which line did I get in? Well, in truth, I was one of the first off the plane, and there weren’t any ‘lines’. There wasn’t anyone waiting. I went to the non-EU window, had my passport scanned, and was passed through without comment.
A driver was waiting for me on the other side, and I was quickly trundled into a comfortable car and taken on the short ride to the medieval old town, with its numerous towers, heavy stone walls, and beautiful church spires. I won’t share many photos of the city here; you can see plenty just by googling medieval Tallinn. Anyway, this first day wasn’t about tourism. After quickly dumping my stuff in my room, I headed down to the basement where half of the participants had already arrived and were diving into their first games of Frostgrave!

I should at this point thank Gamemat.eu who provided the mats and most of the terrain we used throughout the week (it was quality stuff!) – and to Brent Sinclair who got their early with glue and fake snow to give it all an extra Frostgrave feel!

Over the course of the six-day tour, I would end up playing 9 or 10 games of Frostgrave – most of them 3 or 4 player affairs. Over the course of those games, my enchanter, Archadeamos, went from level 0 up to level 20. He made a lot of enemies along the way, and lost a lot of soldiers, but he also recovered a small clutch of magic books, two magic staves, enchanted weapons, and all kinds of other loot. He would encounter snow trolls, bog monsters, ravenous beasts, barbarians, wraiths, and a large number of bears!

I had actually written six new scenarios for the tour, and it was a lot of fun to try them out and surprise the other guys with brand new material. In a couple of cases, I had to modify the scenarios on the fly, because I either realized I had made an error or due to the peculiar circumstances of the tour. (Yes, these scenarios will be made available in a future Spellcaster Magazine!)

The gaming that day paused only for dinner and went late into the night!

The next morning dawned cold, but clear, with not a snowflake to be seen. Dressed in our warmest clothes, we set out to explore the town with the help of our guides from Tales of Reval. Two of their members, Ivar and Koit, would become like additional participants of the tour, as they accompanied us throughout the week, and even joined in a couple of games of Frostgrave! This day, Koit was in his full medieval get-up, and, accompanied by an equally well-dressed musician, he regaled us with legends of the city, taught us our proper lordly walk, and showed us all of the interesting sites that the lower city had to offer. We also had our first encounter with the mysterious Albert Magnus who would visit us throughout the trip, speaking his wizardly riddles. Then Koit took us to a medieval pub for lunch, where the menu included: meat soup (with no spoon), meat on a bone, and meat in a pie… and that was basically it. 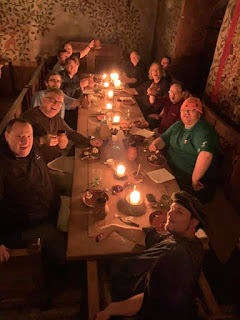 After lunch, we split into two groups. One returned to the hotel for a little rest (or more gaming) while the other went off to the blacksmith. Then we switched. I admit it, I was expecting to see a big guy beating out horseshoes on a huge anvil. Instead, we were taken to a modern workshop, and guided through the process of forging a little pendant with our symbol of power engraved into it. I declined the opportunity to use the blowtorch!

That evening we went to the city’s most famous restaurant, the ancient, gigantic, Olde Hansa, for a medieval feast. There, accompanied by the strange sounds of the hurdy gurdy, we partook of many intriguingly spiced dishes… so much food I could barely hope to sample most of it. Honey and cinnamon beers were also passed out, and drunk with gusto. As the most-practiced wizard in the group, I was set at the head of the table, and got to wear the funny hat.

When dinner was done, the table was cleared, the frost mats were thrown out, the terrain set-up, and the gaming began again! Of course, with nothing but candlelight to illuminate the table, it was a very different gaming experience! We often had to use our phones to figure out the results of our die rolls!

Again, the gaming went late into the night… 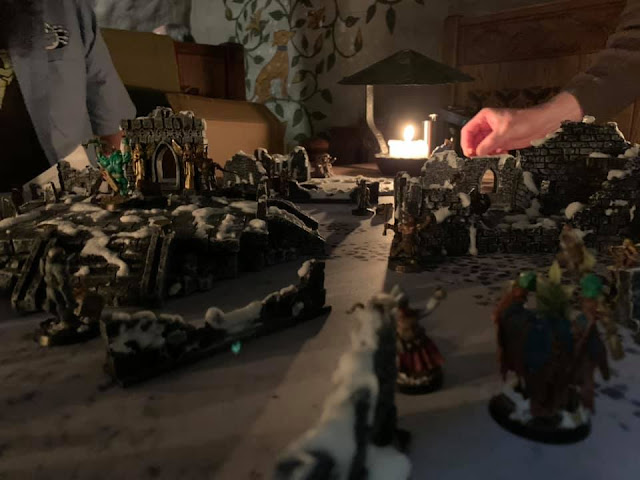 Part II coming soon... (I mean, I haven't even gotten to firing the cannon, or the catapult, or the creepy ruined mansion, or 100 degree celsius spa!)

Thanks to Brent, Robert, Teras, and John for the photos used throughout the tour blogs.
Posted by joe5mc at 06:33