Gandalf (and the Nazgul) 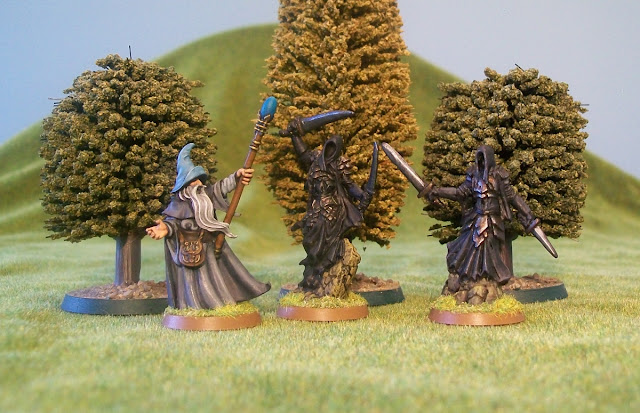 If I went back through my life, I have probably painted about 20 different Gandalf figures, both official and not. I don’t see this as a problem. He is arguably the greatest character in the history of fantasy, and he’s fun to paint. By why another one? Why this one?

Well, over the last year, I have felt myself moving away from the official The Lord of the Rings figure range. I still think they are beautiful miniatures, and I’m certainly proud of my little Minas Tirith army, but, there are several issues.  First, it has proved tiresome trying to keep up with all of the re-packagings, out-of-printings, casting material changes, Forge World vs. GW availability, price-hikings, etc. I just don’t have the time to pay attention. The bigger reason though, is that I’ve realized that the figures are just too small and their features too fine for me to fully enjoy painting them. I know this means they are more realistic – like I said, they are beautiful – but they don’t mesh well with where I find enjoyment in painting – especially as my eyes have gotten older. 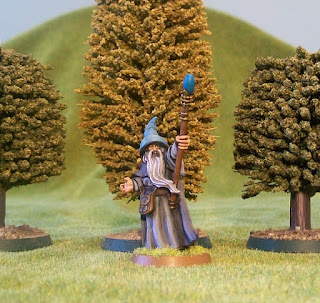 I’m sure I’ll paint some more in the future, as I still would like to add a few bits to my army, but when it comes to characters, I’ve decided that I will look to other ranges. The best part about this is that I can choose figures that are closer to my personal vision of the characters, rather than the movie interpretations, as good as most of those are. When I first saw this figure, I knew I wanted him for my Gandalf. Okay, his staff isn’t quite right, but otherwise I think he is spot on! It should probably come as no surprise to readers of my blog that he’s another Bobby Jackson sculpt, from Reaper.

Painting proved pretty straightforward on this one. I mean, it’s mostly shades of grey, and all of the great folds in the cloak and robes made shading and blending really easy. Actually, this ease meant that I spent more time on it, because I was enjoying it so much. I didn’t get quite the shade of blue I was looking for on the hat, but its good enough. 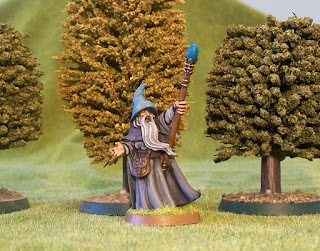 Really, the only part of the process I didn’t absolutely love was hacking the figure off its integral base, but that only took 20 minutes or so.

So, scratch off one more on my Fellowship of the Ring project. I only have Boromir, Gimli, and Pippin to go, though I haven’t identified minis for any of them yet. (I haven’t shown either Frodo or Merry. I have painted figures for them, but I’m not completely happy with them. Still they will do until better ones come along.)