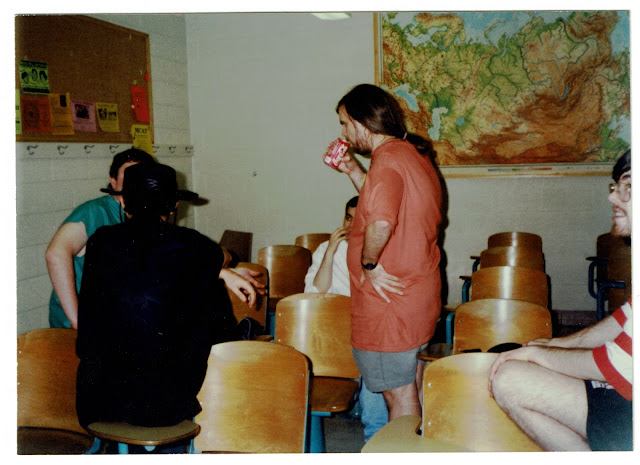 Okay, the truth is, I’ve only every participated in one LARP (Live-Action Role-Playing). It was a Shadowrun LARP, and I think it took place in 1996. The above photograph is the only one I have from the event, and one of only two I have of me gaming in college (I showed the other last week). I’m the guy in black with his back to the camera.

Chimera, the science-fiction & fantasy club of the University of North Carolina at the time, arranged the game as part of their little convention: Chimera-fest. The game completely took over one of the campus buildings, with the different floors representing different areas of a city. All of the wealthy people lived on the top floor, all the gang-members and such on the bottom floor, with everyone mixing in the middle, as befits a cyberpunk setting!

I played a street-mage, and was one of the few people to actually come in costume – although, I admit, that apart from the hat, that’s kind of how I dressed during college anyway. Actually, in retrospect, this was a bad character to play in my first LARP. My character didn’t come with any plot, instead, since he had magic that could compel people to tell the truth, he was essentially a device for moving the plot along. At the time, though, I didn’t really understand that. So, since I was a mage, and everyone thought I was really scary (despite having no real offensive magic) I spent most of the game as a high-end bodyguard, who relied on bluff to keep people safe!

Anyway, I had a good time. I think most people did. I do remember my friend Matt, playing a rich businessman, descending to the lower floor for reasons unknown. When the denizens of the bottom floor got a look at him, they immediately drew their guns. Matt pulled an equipment card out of his pocket, shouted ‘Armoured Limo’, which was printed on the card, and ran off at full speed.

I think I would probably enjoy LARPing, but for whatever reason, I was never interested enough to actually seek it out.
Posted by joe5mc at 02:29