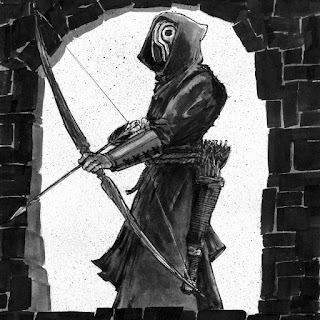 I just wanted to take a moment and let everyone know how things stand with Rangers of Shadow Deep.

The Deluxe Edition - Apparently stock of this book is getting low again, and, it might be the last printing. With rising printing costs and smaller print runs, it might not be possible to keep this version of the book in print, so if you want one, get it now. I am talking to Modiphius about different ways to keep the book in print.

Dungeons Deep (The Rescue Part 2). The truth is, I did a lot of work on this book and then decided I wasn't at all happy with it. So, I decided to ditch it and start over. Unfortunately, I have a couple of contractual items to complete before I can get back to it. I should be working on it towards the end of the year, with an eye to releasing in the first quarter of 2021.

Blaster 2 - This anthology is going to contain the first part of my Shadowgrave rules, essentially bringing the Cthulhu Mythos to games of Frostgrave, Ghost Archipelago, and Rangers of Shadow Deep.  It includes rules for sanity rolls, permanent madness, some monsters, and a scenario for each game. The anthology is essentially done, we are just having some issues getting it uploaded to DriveThruRPG for print-on-demand.

Monster Cards - Modiphius are working on a set of monster cards that will include a card for every creature that has featured in the game so far. Barrett Stanley has provided illustrations for all of the creatures that have not previously been illustrated.

So, that's where things stand at the moment. I'll let everyone know if anything changes on any of those, or if anything new comes up!