One of these days, I would like to assemble all of the pieces necessary to play a science-fiction version of Blackhawk Down. I've been working on my Stargrave colonial marines, and I just started making some rough-looking terrain.

But the part of the project that is most exciting to me is assembling a convoy of marine vehicles. For awhile I have been searching for a good science-fiction equivalent of the Humvee. After studying a lot of options, I eventually went with the Games Workshop Achilles Ridgerunner. It's got a lot of pluses. First, it's plastic, which is my preferred vehicle material. It's open-backed, which gives some fun modeling possibilities, but most importantly, it looks tough. It looks like it can weather a lot of harsh terrain and small-arms fire and keep on rolling! 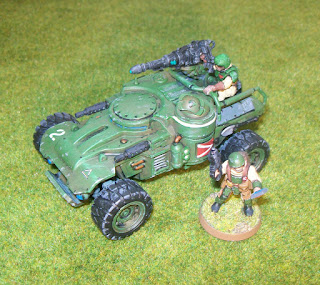 For the most part, I followed the assembly instructions exactly as in the box - though there are a couple of different options given. The only real conversion work I did was on the figure riding in the back. I used the legs and left arm provided, because they are designed to fit in the space, but then I used a GW Cadian torso, before personalizing it with a Stargrave head and right arms. It's amazing how this little change pulls the whole model away from its intended GW setting.
There is nothing special about the painting. I don't hugely enjoy painting vehicles, so tend to go with a quick approach with a lot of dry brushing. I also like to put on some decals, as these really enhance the look without much effort.
Of course, one vehicle does not a convoy make. I hope to add a couple more of these guys and a couple of trucks as well. But this is a long-term project, so I'll pick them up as and when I feel like making them.
Now I need to start thinking about the opposition... 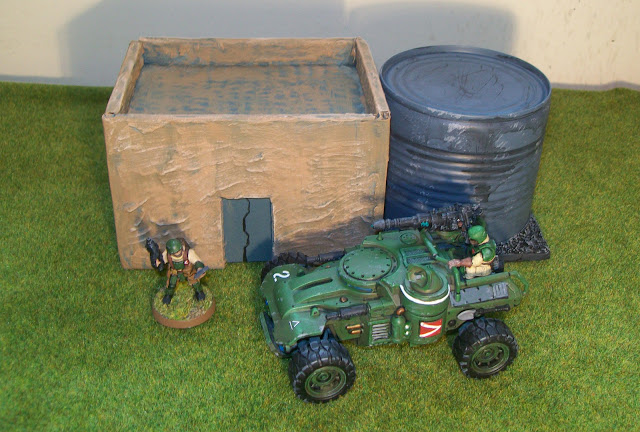