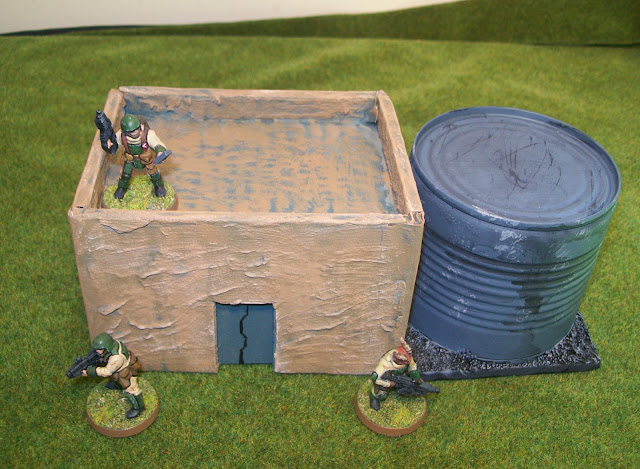 This weekend, I got the itch to make a little old school wargaming terrain for my Stargrave figures to fight over. Now, don't get me wrong, I love a table filled with beautiful, commercially produced or 3D printed terrain, but I also find something charming about the rough-hewn look of hand-made stuff.

More importantly, there is something greatly satisfying about using your own hands to create something out of nothing. Okay, not quite nothing, but mostly out of stuff pulled out of the bin.

The house is made out of corrugated cardboard, held together with dress pins and white glue. I used masking tape to cover the exposed edges. Then I brushed over the whole thing with plaster and, once that was dry, with watered down glue to help hold the plaster in place. Then I just primed it, dry-brushed it, varnished it, and called it done!

The little tank/silo was even easier. I cut a bit of cardboard for a base, taped the edges, and then glued a small can to it. I added a bit of sand around the edges. Then I primed it up, gave it some rough paint and a varnish. I didn't actually aim for the two pieces to be the exact same height, it just worked out that way.

I'm pleased enough with this little set that I might do some more. I like the idea of a town where every house has it's own tank next to it. Maybe it holds water, or silage, or alien grubs, who knows. 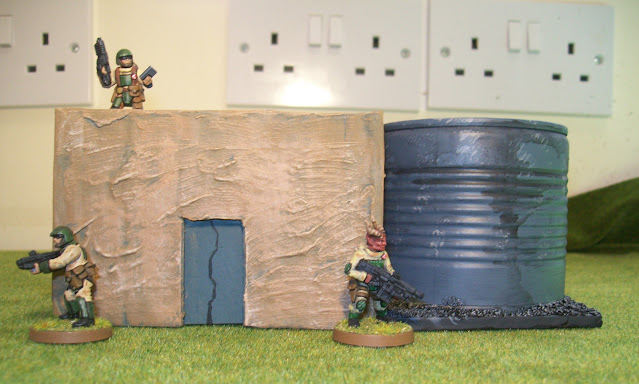