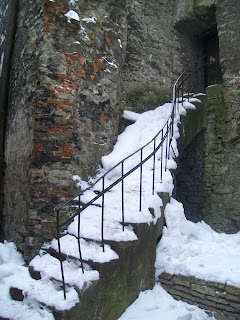 The eastern most of the Baltic States, Estonia has a landmass slightly larger than the Netherlands, but only a fraction of its people.  Its 1.3 million residents gives it a population density about the same as the United Sates.  Nearly half of the country is undeveloped wilderness. In February, the temperature rarely gets above freezing, and temperatures of -20C are common.  However, my wife and I lucked out. The average daytime temperature while we were visiting was -5 and it never dropped below -10 during the day. Okay, it was cold. Really cold, but if you bundled up right, you could stand walking around in it for an hour or so before it was necessary to duck into a shop, museum, restaurant, or cafe, and there were plenty of those to choose from. As a tourist, it was part of the charm.
So we wandered the streets of Tallinn in short little bursts, discovering many delightful streets. (Photo 14, 15, 16). The locals kept all of the walks shovelled and well gritted, but we were still thankful that we had taken the advice to bring our walking boots. Without a doubt, our favourite discovery was in a little courtyard in the ruins of a Benedictine Monastery. Here, in a poorly lit cellar, was the oddly named ‘ICHTHUS’, the artistic studio of Aleksanor Savchenkov.  There in the dim, cool, dungeon, Savchenkov sat and painted, with Latin chants playing on the CD player.  Most of his artwork depicted scenes from Tallinn, many with religious themes, many of which obviously told stories of angels and medieval times. Unfortunately, his English (nor my Russian) were up to the challenge of complex communication. I checked later, and his studio is mentioned in none of the guidebooks, which is truly a shame, as this man has created his own little world, beautifully out of time. 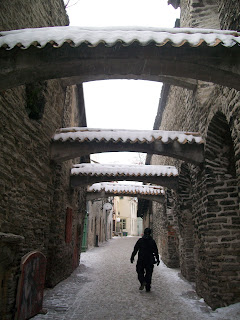 Estonians, as a rule, are trilingual. The official language is Estonian, a Finnish-Hungarian language so difficult that even my wife, who is quite good with languages, had difficulty mastering simple words such as ‘hello’ and ‘thank you’.  All Estonians also learn Russian, and fully a third of the population is ethnically Russian. There is still a good bit of tension between the Russian and Estonian populations and most ethnic Estonians will only speak Russian if absolutely necessary.  Thankfully, Estonian schools also teach English, and, at least in the tourist areas, they speak it to a high standard.
At night, we retreated into one of the many warm and welcoming restraints, many of which sported a medieval theme. While this would probably come across as rather cheesy in England or the USA, it really seemed to fit with the city, and warm candles, mulled wine, spiced beer, and roasted pork all seem very fitting as the snow continued to fall outside.
Posted by joe5mc at 01:27