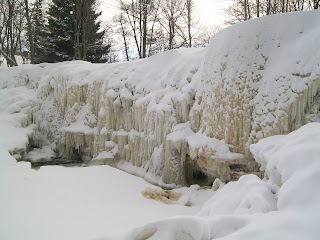 Tallin is truly an amazing little city, but after two days, my wife and I wanted to see a little more of the country. So we signed up to take a day tour out into the country. Actually, our ‘tour’ consisted of us, an Estonian college student/guide and a van.  (I’m still trying to figure out how it made economic sense to run this tour, but I’m glad they did).
We sped out of town early in the morning, going 40-50 mph on roads that made you grip the dashboard and pray that you were in good standing with the big man upstairs.  Our guide told us that all Estonians are required to take an ice-driving course in order to get their license, which only made me feel a little better.  Our first stop was at an isolated beach. Well, it was a beach part of the year, now it was hard to tell where the land ended and the sea began. Here you could stand on the frozen ocean, watching the chunks of ice floating free.
From there we travelled to where the Soviets used to train their nuclear submariners (and where they’ve buried their training reactors for disposal at a future date) and to an abandoned coastal battery from the 1920s. Normally you can’t enter this as it is usually flooded, but we could walk on the ice through the pitch black ruins. Soon after, we stopped for lunch in the town of Paldiski. 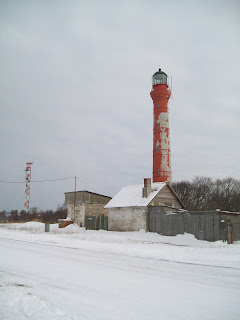 It is perhaps a shame that we took no pictures of Paldiski, but it wasn’t the kind of place that made you want to get your camera out. Built as a harbour/shipyard by the Russians, who imported the workforce, the town was one of the ugliest, most depressing places I’ve ever been. Most of the buildings were crumbling, rectangular apartment blocks, neglected and grim. When the Soviets granted Estonia its independence in the early 90s, most of the Russian population of the town decided to remain. We stopped in a tavern, constructed of heavy wooden logs and stone, and ordered a lunch of thick, red soup containing tiny bits of pork and vegetables with a strange sweet and sour flavour. When our host discovered we were tourists, she brought out a photo album of old pictures of the town, which she was selling. I bought one of the harbour which I thought contained a warship (the tavern keeper identified it as the Russian battlecruiser Aurora, which fought against the Japanese in the Russo-Japanese war). The soup was good, and for the first time we heard Russian folk music playing on the radio (as opposed to English/American pop which is most popular in the country).  However, our guide became noticeably less chatty and slightly uneasy throughout lunch.
With nothing really to see in Paldiski (but richer for the experience) we sped out of town to one of the more memorable sights of our trip, the frozen waterfall. Think about just how cold it has to get to freeze a waterfall some thirty feet wide and twenty feet high. Actually, it wasn’t completely frozen, water was still rushing through underneath the ice and bubbled up in a small pool at the bottom, before running off down a semi-frozen river. At one spot you could actually climb into the waterfall cave, and, of course, we did.

Our next stop was a building that would be a major tourist draw in another country, the ruins of the Padise Monastery.  Built between the 12th and 13th century by Cistercian monks it was later seized and militarized during the Livonian war. Although there has been little attempt to make it into a tourist destination, the government has built an access way up to the top of the tower and put roofs over parts of the structure, which are occasionally used for concerts. Exploring the ruins means walking through knee high snow, but that just made it more fun! 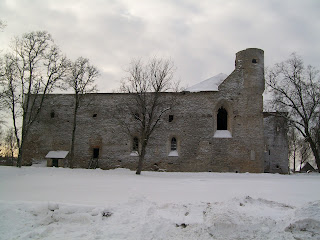 Our last stop on the tour was in a lonely spot by the side of the road. After a short walk through the deep snow of the forest, we came across a strange little graveyard. The graveyard had once served the nearby Soviet airbase, and instead of headstones, many of the markers were tails from old MiG fighter jets. The graveyard is now essentially forgotten and only maintained through the effort of locals.
We arrived back in Tallinn in the late afternoon, very tired, but glad that we’d gotten to see so much more of this fascinating little country.  Our visit to Estonia was never meant to be a long trip, nor a thorough exploration of the country, but as a quick tourist, fact-finding mission, it was a complete success. If I had to advise, I would go against the popular wisdom, and say DO go to Tallinn in the winter. My wife and I both agree that it was the snow and the freezing temperatures that made this trip such a different and interesting experience. Also, it meant that there were no crowds and no lines, almost like we had the city to ourselves. 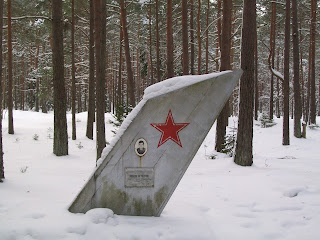