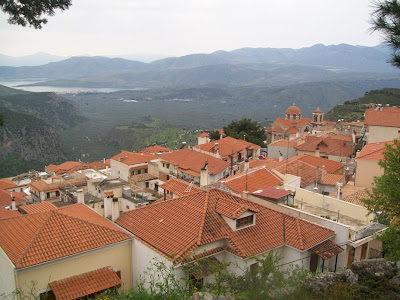 I travelled to Greece in the hope that I might find a lingering sense of magic and myth, of the days when Jason sailed in the Argo and Theseus fought the Minotaur. I never found that in Athens. The city was just too crowded and hectic for such quiet feelings to survive. So, on our second full day in Greece, I was ready to move on to Delphi, once the site of the Oracle of Apollo, and a common feature of many Greek myths.

Despite being a major tourist destination, the only public transportation to Delphi is an infrequent bus service, departing from Athens’ northern bus station. Our guidebooks warned us that these buses sometimes sell out, so we caught a taxi to station and bought our tickets forty-five minutes early. We needn’t have worried. As we discovered throughout our trip, April is not tourist season in Greece. 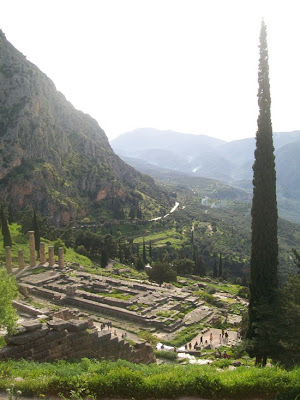 Sitting in the back of our half-full bus, we motored out of Athens on a quiet, but well maintained road. The scenery rolled by, becoming more and more mountainous. Before long, we were winding our way back and forth up and down steep mountainsides, and weaving our way along steep shoulders. After an hour-and-a-half, we stopped at a remote mountain hotel for a quick drink and bathroom break. Then it was back onto the bus for another ninety minutes of high-mountain driving. As we neared our destination, we passed through several idyllic-looking little villages clinging to the mountainside. We were so taken in by the view, that we nearly missed the ancient ruins as they flashed passed on both sides of the bus. We had arrived in Delphi.

The modern town of Delphi sits about 500 meters up the road from the Ancient site. It is a small, tourist town, built on four or five levels running up the side of a mountain. The main street is nothing but hotels, restaurants, and gift shops, but the rest is mostly houses, a cute school, and an impressive church of St. Nicholas. Our hotel was about halfway down the main street and proved easy to find. We checked into our comfortable little room, opened up the balcony doors, and revelled in the view. In that moment, I saw mythic Greece. 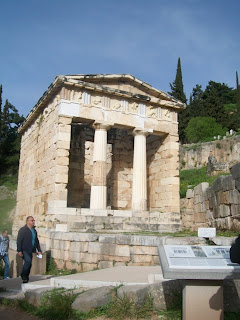 From our balcony, the land fell away into a deep river valley, populated by small trees and a scattered few houses. Down in the distance, between the long arms of the mountains, we could see a little town, all clustered red roof-tops, resting at the edge of the sea. In that quiet stillness, my mind added to the scene: a couple of galleys with sails spread pulling into the bay, a group of heroic warriors staring down from a mountaintop, a terrible creature with poisoned fangs, lurking in some hidden cave. This (for the incredible price of 28 euros a night) was more than I had hoped.

After a fantastic lunch, we spent the rest of the day exploring the deserted streets of Delphi and relaxing on our balcony. It was the perfect antidote to the crowds of Athens.

The next morning we were up early, determined to be the first through the gates at the ancient site. We didn’t quite achieve that, but we did at least beat any tour buses. The ancient site of Dephi is a wonderful place. Its ruins line both sides of a twisty path, that slowly winds its way up the mountainside. At first we passed a scattering of foundations and a heavy stone wall. Slowly the ruins gained a bit more shape, and we begin to see the various little booths, or treasuries, set up by different city states to house statues and other show-pieces. As we rounded one corner, we saw the treasury of Athens, a heavy-looking little temple-like structure that was rebuilt from its pieces (following ancient plans). Further on, we passed by broken columns and numerous plinths, that once held the (literally) thousands of statues that crowded the site. 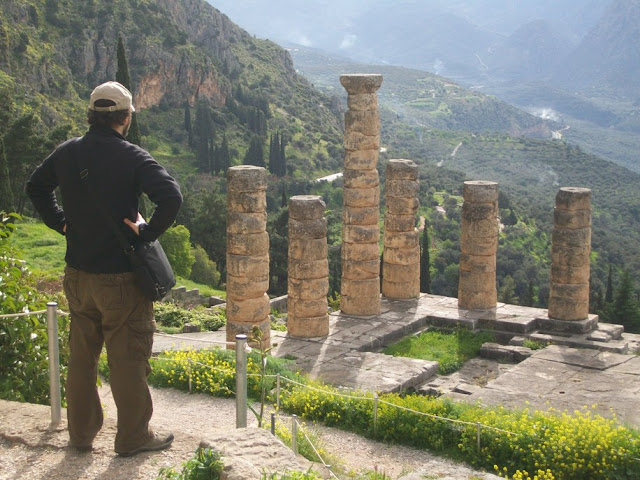 In a short time, we reached the heart of Delphi, the foundations of the temple of Apollo, where the Oracle would announce her prophecies. (Note, this is where the oracle of the historical period, say 500 BC would sit. The oracle of the mythical period, say 1200 BC, would have sat lower down the mountain, surrounded by a lot less fanfare.) The foundations are impressive enough, but combined with the six massive columns, re-erected by French archaeologists, and given the views all around, it is truly a spectacular site.

By the time we reached the temple, a tour bus had arrived, and a large group surged up the hill in an adolescent wave. Luckily, we were mostly able to stay ahead of this group and keep the peace of the site. It is definitely worth staying overnight in Delphi and getting the early view of the site. 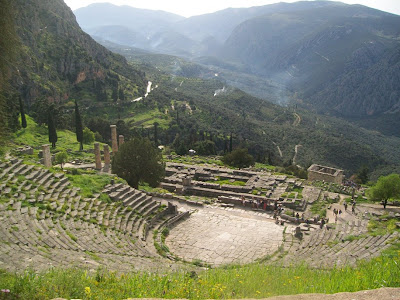 Moving on from the temple, we continued to climb up to the theatre, where upwards of 5,000 people could once have crowded in to watch the dramas of the day. It is from the top of the theatre that  the best views of Delphi are obtained, as you can look down on all of the rest of the ruins, and out into the valley beyond. I think most tourists probably stop there, as the path becomes very steep at that point. However, for those with the wherewithal to continue, a short hike through the trees gains a view of the ancient stadium. It is a small (probably minor league) stadium, but beautifully constructed.

Thinking about it afterwards, while Steph and I had a very calm and peaceful exploration of this ancient site, this is actually at odds with how Delphi must have been in its heyday. The place appears to have been something of an ancient Las Vegas, with various groups all trying to outdo one another with their fabulous treasuries, statues, and monuments. 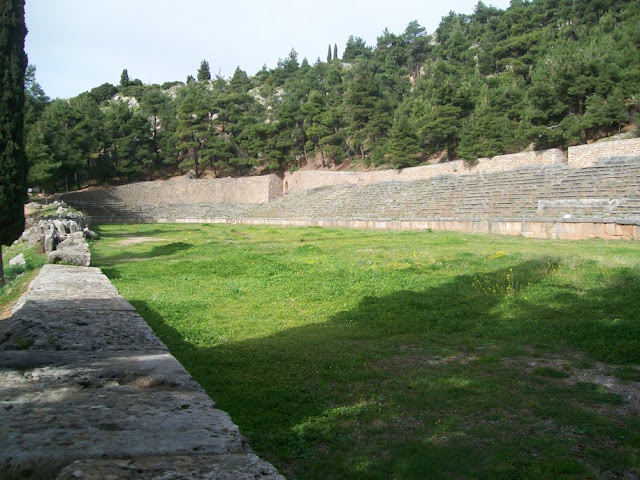 After we finished our explorations, we came back down the hill and along the road to the nearby museum.  This is a fabulous little collection of artefacts, which I will discuss a bit more in tomorrow's blog. 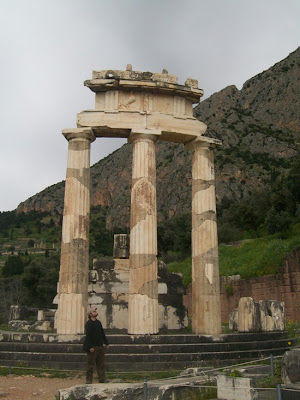 Although it was only noon, and we already felt like we’d had a wonderfully full day of ancient sites, we weren’t quite finished. Strangely, we hadn’t seen the one sight that is most commonly associated with Delphi.  A bit farther down the road away from town, unconnected by pavement, and sort of haphazardly sign-posted, is the Marmaria, another collection of ancient ruins. These are mostly just tumbled down collections of rocks; however, the site is dominated by the three rebuilt columns of the Tholos, a round temple to Athena. Despite its fame, we were mostly alone at the site, and ate our packed lunch while staring at the ruins.

The rest of the day was spent relaxing at various viewpoints. After about 3PM, Delphi was once again nearly deserted with all the day-trippers having headed home. I think we could have easily spent another couple of days at Delphi.
There are paths that lead out of the town both up the mountain and down the valley, and it would have been nice to go down to the town by the water, even if there is probably nothing much there.  However, we still had more of Greece to see, and the next day had already been scheduled for a very long bus ride...