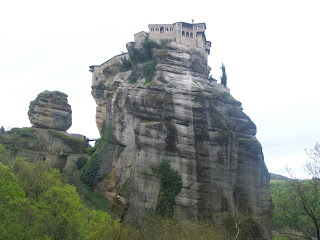 Having worn ourselves out the day before, Steph and I decided to start our second day in Meteora with a bit of a cheat. Instead of walking the several miles back to the point we had reached the day before, we decided to take a taxi instead.

We began by walking down to the centre of Kalambaka and buying our lunch from the bakery, which had slightly better looking sandwiches than anywhere else. We then went across the street to the taxi stand. It took a moment to explain to our driver that we didn’t want to go directly to any of the monasteries, but wanted to be dropped at the head of a path by the side of the road. Once the driver had figured out our destination, he turned around and walked over to a nearby trailer that was selling fresh fish.  He spoke a few quick words with the fish monger, received a bag of fish and ice, which he tossed in the trunk, and only then did he get into the car.


It was about a fifteen minute drive to our destination, a wide patch by the side of the road. As the taxi pulled away, we saw an old man, with a huge mane of curly grey hair, sitting on a bench with a small dog. The man looked at us and said, ‘Oh, you take the old path...’. It turns out that the man was born in Kalambaka, but had lived a good chunk of his youth in New England. I could still detect a faint Yankee twang to his English. He said it had been nice to live in a modern country, but that the dreams of Kalambaka had never left him, so he had returned. Now, he sat on this bench, because there was no work to be had. His wife spent her days selling little knitted flower hair accessories near the entrance to one of the monasteries. (Actually, Steph had bought one of those knitted flower hair clips the day before, more, I believe, out of charity than anything else). It was an easy-to-believe testament to the economic difficulties in this corner of Greece, even one that had such spectacular tourist attractions.

Eventually we left the man behind, and started up our path. Even though the path had been marked on our map, it was clear that it was little used. The short trees grew close all around. Despite the steep, rocky terrain, we were fresh and made good time. Soon we came to a small clearing, and the gaping mouth of a cave, a dragon’s cave. I would later learn the story behind this cave, and a new story of a nameless dragonslayer, both of which I will share in a future post.  After a quick crawl around, we started up again. In all, we climbed for nearly an hour before  we caught our first glimpse of the giant monastery of Great Meteora, the oldest and grandest of the region. Should you ever come to Meteora, and only have time to visit one monastery, this is the one. Not only does it have wonderful views of three other monasteries, and a truly grand church, it also contains a museum of manuscripts and other treasures, a medieval store room, an ossuary where dozens of skulls sit on a shelf, and a small museum devoted to the Greek War of Independence.  It is certainly the most complete ‘attraction’ of the monasteries, but also the only one that felt just a tad busy and crowded. 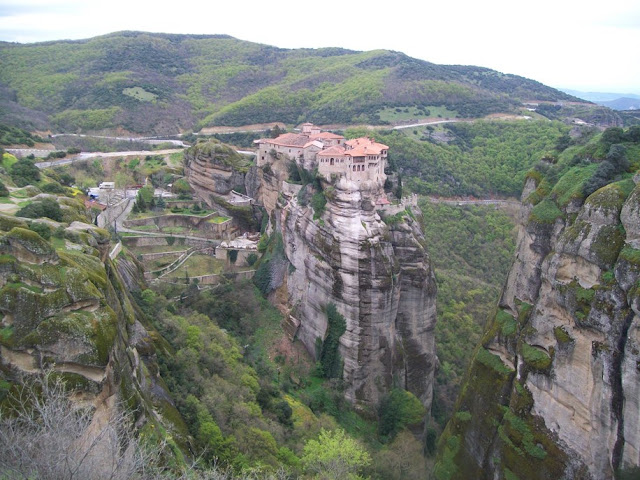 From Great Meteora we took the short walk down the road to the monastery of Varlaam, which sat on its own great tower of stone. After another wearying stair climb, we made it inside. While examining the frescoes inside the church, Steph and I were approached by a young monk.  (Unlike western monks, Greek monks dress all in black and sport long beards).  He asked if we had any questions, as he had some time to spare. I asked him about the meaning of several of the frescos, especially about the scenes of judgement. His English was broken, but I’m pretty sure I got the gist, and learned a thing or two about Orthodox theology as well. Despite approaching us, he seemed a shy man by nature, especially towards Steph. But he answered her questions as well, explaining that he had lived in the monastery for the last ten years, and that in every way it was his home. 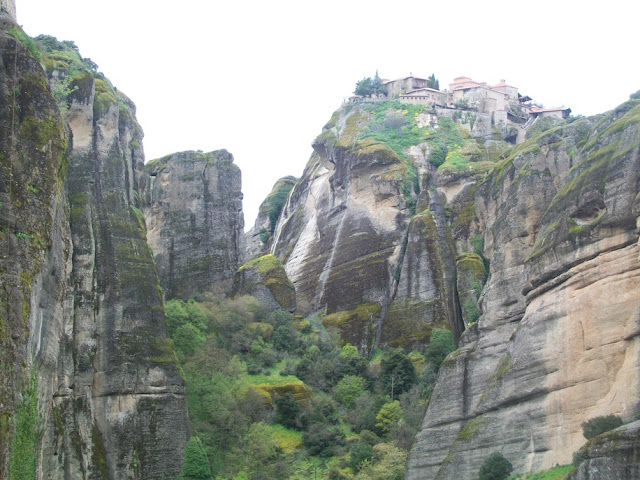 Unfortunately, our quiet chat was soon interrupted by a large group of noisy Spanish tourists. The poor monk actually winced in pain as the noise echoed into the previously quiet church. Kindly, he opened a side door, allowing us to escape. The last we saw, the monk was doing his best to find someone who spoke English to try and communicate with the group. 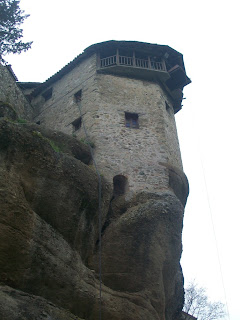 From Varlaam, we walked down a long, winding, quiet road to the convent of Roussanou.  It was meant to be our final stop for the day, but it turned out to be closed (It closes several hours before all the others). Unfortunately, Roussanou was located at the furthest point away from our guest house, and no matter which way we turned, it was a long road back. Still, it was a pleasant day, and the world was quiet, so we set out. Our little tourist map did show one path that cut down through the side of Meteora, and could potentially save us an hour or two on our journey. However, as we had learned several times before, not all paths are created equal. Leaving the road, we once again plunged into the trees. At first, the path seemed clear enough, but as time passed, we grew less and less sure about our direction. Looking back, I think we mistook an old stream bed for the path, and thus went badly of course. At an hour in, we were both convinced that we had lost the path, but neither of us cared for the prospect of the steep climb back up the way we had come, so we pressed on, hoping to rejoin the path somewhere below.

At one point, we were passed by a long line of goats, wandering their own way back up the mountain. I hoped they might be accompanied by a goatherd, but no such luck. So down we went, until we got stuck. We reached a point that no matter which way we turned seemed to lead to a sheer drop down a nasty height. Thankfully, it was still early in the afternoon and plenty of light remained, so we weren’t overly worried, but I admit, I was a tad disheartened. Thankfully, my wife is a great deal braver with regards to heights than myself. After a bit of exploring, she discovered a fissure between two rocks that we could slide down on our butts with little danger. Faced with either that or the prospect of climbing back to where we had started, I happily took the slide. This proved to be the crucial move, because after a few minutes, we popped out onto a cobblestone path. From there, it was a just a gentle walk down to our guest house. 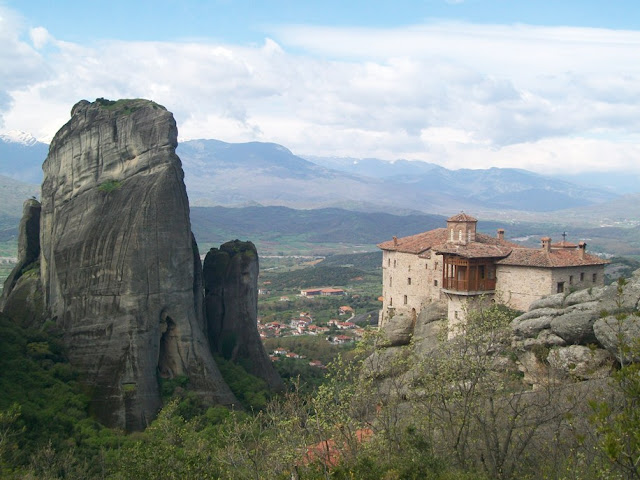 The rest of the day passed in a relaxing way, with the door of our room opened to the balcony, where a contented little cat snoozed away on a chair, and where I could see some of the high grey rocks of Meteora from our bed.


On our third and final full day in Meteora, we visited all three of the remaining monasteries. In truth, I don’t think any of them really deserve great individual attention. Compared to the previous two days, this one was quite relaxing. It was by far the sunniest and clearest day in Meteora, and we took it slow, often stopping to sit and admire the views. We didn’t get lost, nor talk to any monks, nor discover anything much beyond what we expected, but we loved it. If the previous days had been about wonder and discovery, this day was about the joy of our being together, someplace far from home, where cares could be set aside to walk amongst the quiet beauty of the world.

It was a very, very good day. 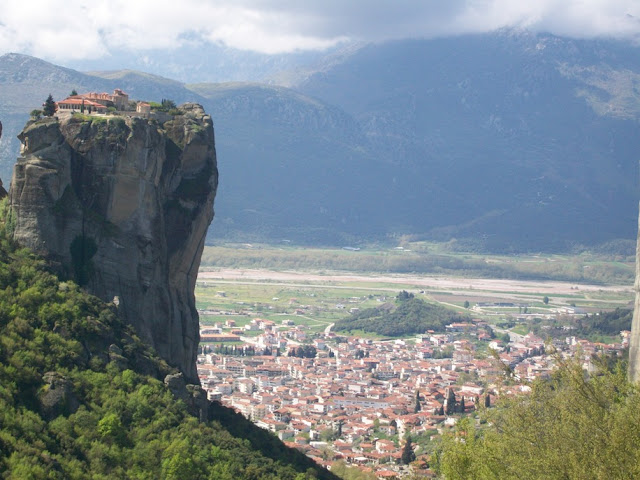