The museum at Delphi is small, but it contains a number of really beautiful and interesting ancient pieces. While I love history and can find something of interest in most museums, when in Greece, I am most interested in works connected to the ancient myths. Contained below are a few of my favourite pieces from the Delphi museum. They aren’t necessarily the best, but they are of the most interest to me.

The Sphinx of the Naxians 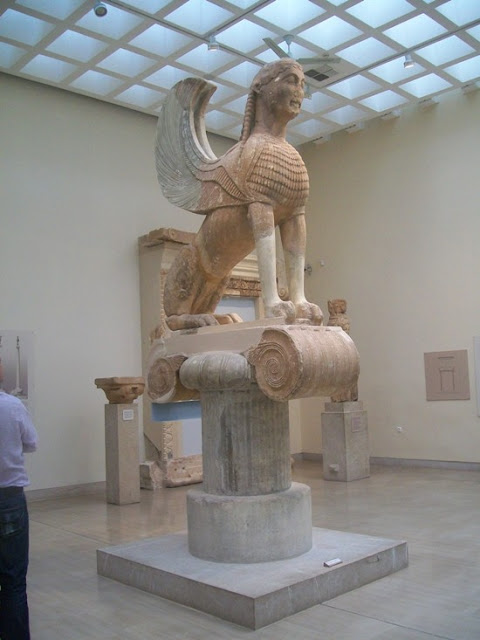 One of the major show pieces of the museum, the Sphinx of the Naxians once stood on a high pillar in the midst of Delphi. It has been somewhat repaired from the state in which it was discovered, but is still a beautiful work. Naxos was an ancient Greek colony in Sicily, and according to the museum info, the Sphinx was a statement of Naxian artistic prowess. What connection the Sphinx has with the city, if any, was not mentioned.

The Philosopher of Delphi

The plaque next to this statue identifies it as ‘old man’, but says that many people think that he was meant to be the ‘Philosopher of Delphi’, though it offers no explanation as to that means. I just think it is such a great sculpture, and the man could easy be a representative of any ancient seer or wise man.

The Labours of Hercules

When the Athenian Treasury in Delphi was rebuilt, the archaeologists wisely used plaster casts to replace the friezes that ran around the tops of the walls. The originals are now housed in the Delphi Museum, and include several really interesting pieces.  The best of these are a couple of fragments from the labours of Hercules.

As my interest in dragons and dragonslaying stories is well known, it should probably comes as no surprise that one of my favourite pieces is a fairly clear depiction of Hercules fighting Ladon, the dragon of the Garden of the Hesperides.  Although Ladon is usually depicted with multiple heads, it’s a great sculpt, nonetheless.  This section also contains a really nice centaur, minus the face. 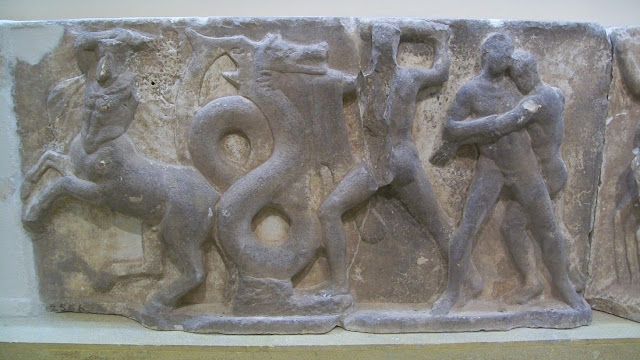 Another fragment of the same frieze contains an interesting depiction of Geryon, the three bodied giant.  I’m sure this creature is an artist’s nightmare...what is a ‘three-bodied’ giant anyway? Well in this case, it looks pretty literal, three bodies stuck together. Six legs, six arms, three heads.  I’m slightly surprised to see one body carrying a shield, though I don’t know why I should be. 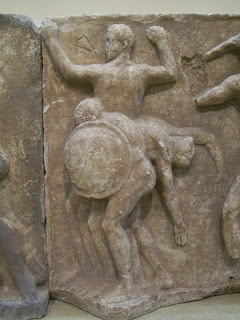 Anyway, those are just a few of my favourites from the Delphi museum. There are other pieces that other people I’m sure would find more impressive, but these are the ones that really caught my imagination.