The Road to Kalambaka: The Greek Adventure Interlude 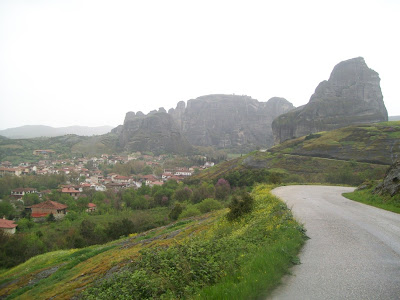 Dephi isn’t big enough to have a bus station, so instead, tickets are bought from a cafe on the edge of town, near where the bus stops.  As Steph and I had a long day of travel, we caught the earliest bus, around 10AM. We bought tickets for Lamia, knowing we would have to make two more switches.

When the bus arrived, right on time, the bus driver informed us that we would have to change buses at Amfissa, a step we hadn’t planned.  So we boarded the half-full bus and set off on our merry way.  It was another windy journey, down one mountain, up another, and down into a valley.  The scenery was spectacular, and thirty minutes later, we reached Amfissa.  We didn’t see much of the town, but from the bus it seemed a rather work-a-day kind of place. We got out at the bus station, which more resembled an abandoned dry-cleaner than any kind of terminal.  We waited on the side-walk for half an hour, before another bus pulled up. This one bound for Larissa.

The bus ride to Larissa continued the beautiful mountain scenery, and, despite Greek buses lacking toilets, it was a comfortable enough journey.  I had expected to get a lot of reading done on the trip, but I found myself more inclined to simply stare out of the window as the Greek countryside passed by.  Two hours later, we pulled into the bus station at Lamia.

Lamia is a big city and serves as a transportation hub to points both north and south.  The bus station we pulled into was large and clean with nice facilities.  It is only one of the several bus stations in the city, but thankfully the one we needed for the next leg of our trip. I asked for two tickets to Trikala, which the man behind the counter produced with a slightly pained expression. It seemed we had just missed a bus, and the next was not for another two hours.  So, for the first time that day, I did get a lot of reading done, while eating a ham and cheese sandwich. The Greeks don’t seem that big into sandwiches, certainly not like the Brits, but passable ones could be found in most places.

Like every bus before it, the one to Trikala pulled up right on time. Before passengers got on, however, the bus driver got off, and gave a package to a waiting woman. We noticed throughout our trip, that the buses in Greece not only carry people, but also the mail and bits of cargo. At one point we stopped and picked up some auto parts which we delivered along our way.

After a short drive through the mountains, our bus descended onto the plain of Thessaly. In stark contrast to the rest of Greece we’d seen, this was wide, flat country, devoted to farming.  It reminded me a bit of the rural American South, with its small towns filled with rusting cars and scattered farm machinery in every state of repair. Although I continued my quiet survey of the Greek countryside, I did so with less interest, and the hours sitting stiffly on a bus started to take their toll.  It was near to five o’clock when we finally reached the bus station, just outside of Trikala. It appeared that the station was attached to a huge mall, but we didn’t have time to explore as our next (and thankfully last) bus was due in fifteen minutes.

This bus proved to be a much more local route, and we stopped frequently to pick up and drop of passengers. This did give us time to get a good look at Trikala, which appeared to be a slightly more attractive city than most. It at least had a nice river running through it. As we closed in on Kalambaka, our destination, we began to realize that we didn’t really know where to get off. However, when we saw a big fountain, we assumed that was the centre of town, and the guess proved correct.

We knew our guest house was on the northern edge of town, nestled below the rocks of Meteora.  So, in the fading light, we started upwards. Although the great rocks loomed above us on two sides, we were more focused on where we were going. In the dim evening, the upper parts of Kalambaka take on a slightly sinister air. Several houses are half-built or abandoned, junk is piled on the sidewalk, and numerous stray cats lounge on every corner. In truth, it was mainly a product of our tired minds, and after a day in Kalambaka it lost all of its sinister feel, even if much of it could use a fresh coat of paint.

We eventually reached our destination, Alsos house, a beautifully-built and up-kept guest house.  After dropping our bags, we went off and had a lovely dinner outside, back down by the fountain, a great place for people watching as the sun disappears.  It had been a long day of sitting on buses, but what little we knew of Meteora, promised us several days of great walking.
Posted by joe5mc at 11:36