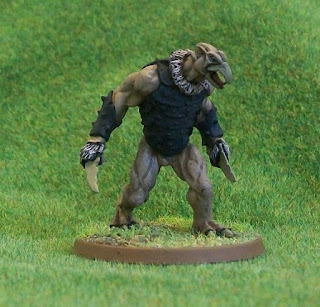 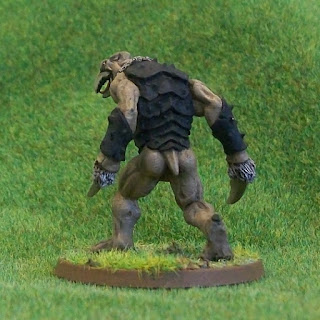 In one of my greatest acts of miniature related willpower, I came away from Salute this year with only two new miniatures. One of those was the Hook Horror from Otherworld Miniatures. The Hook Horror is a classic Dungeon & Dragons monster, and, as far as I know, it was created for the game and does not come from any mythology or folklore.

It’s a rather impractical monster if you stop and think about it. It’s a big, hulking brute with hook/blades for hands. One wonders what it preys upon? I can only assume that it is a magical creation of some diabolic wizard to serve as a guard. If not, who exactly put the armour on him? With those hooks, it’s hard to believe he dressed himself (much less made the amour).

I bought this miniature for two reasons. First, I thought it would make a great generic monster that could be used in just about any setting from mythological Greece through to science fiction. Second, it just looked really fun to paint.
Well, I was right. It was really fun to paint. It is such a nicely sculpted and cast mini, that simple drying-brushing produces a really nice, layered skin tone. I went with the black armour to give as much contrast between with the light skin as possible. It’s a very simple paint job, but I think it looks fantastic.

I'm sure he'll be crashing through a few of my miniature battlefields in the days to come.