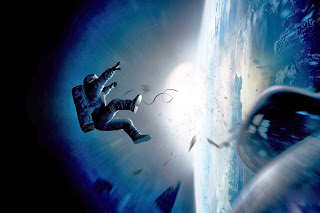 Gravity (Seen in the theatre in 3D)
A very enjoyable space disaster/survival movie. It packs it’s (refreshingly short) 90-odd minutes with breath-taking, 0-gravity, 3D destruction. There isn’t really a huge amount of story, but the solid performances, by the very small cast, pulls the viewer along; although sometimes Clooney sounds a lot like Buzz Lightyear.

Several of my friends went to see this in the theatre and really enjoyed it, so I was looking forward to it. Now, I don’t expect too much from a movie about giant robots fighting giant monsters, but I expect better than this. The story was like a cliché convention. The main character is a hot shot robot pilot whose brother/wingman is killed in battle. He quits, but is called back into duty by his old commander, who is contaminated with robot radiation and will die if he ever pilots a robot again. He is also the surrogate father of the...oh, never mind. That’s actually the better part of the movie. The subplot involving the two semi-comedic scientists is agony. Combine that with mediocre battle scenes and you have a movie not worth watching.

I don’t know if this movie was ever released in theatres. If so I missed it. Basically, Vin Diesel is a fugitive/mercenary living in post-apocalyptic Russia who is hired to smuggle a young woman and her minder into America. I really enjoyed the first half of the movie, but after that it seemed to lose its way a bit. I’m still not sure I completely understand the ending, and I kind of feel there was a piece missing. I believe it claimed to be based on a book which might be worth checking out. Not a bad film, but could have been better.
Posted by joe5mc at 02:42