The Hobbit:The Desolation of Smaug 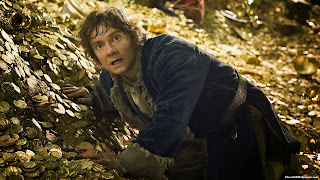 Sunday morning, my wife and I caught the early (non-3D) showing of The Hobbit: The Desolation of Smaug. Even with the 11 AM start time, the theatre was mostly full. Three hours later, we emerged, slightly bleary-eyed and packed with popcorn*, but with big smiles on our faces. Put simply, we both really enjoyed it and thought it significantly better than the first instalment of the trilogy.

It was beautiful, action-packed, and filled with more fantastical elements than any of the previous Peter Jackson, Middle-Earth films. True, in some places it wandered rather far from the source material, but I actually believe it was a better movie for it. The ending was a little sudden and seemingly arbitrary, but we all know it is a trilogy, so that’s not a major issue for me.

If you are a fan of high-fantasy and can accepted that the movie is not the book, then I think you would be hard-pressed not to enjoy the movie.