Galinor of Pelargir (Joins the Glaurung) 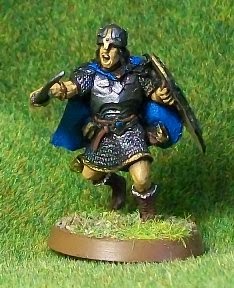 For the second time in as many weeks, Breged has overruled Mandracoth to accept a volunteer to join the crew of the Glaurung. At just nineteen, Galinor becomes by far the youngest member of the crew. For the past two years he has served in the coastal guard for his home city of Pelargir, and in that time has won laurels in both of the city’s Guard Tournaments for his skill in swordplay.

Handsome, charismatic, and perhaps just a bit arrogant, Galinor is one of the city’s most popular sons. When news of Galinor’s acceptance reached the city, the Lord Castellan of Pelargir held a feast and presented Galinor with an ancient treasure from the city armoury, the Dragon Shield of Alenôth.

Although Madracoth eventually relented in his arguments with Breged, he declared that no good would come from this decision.

Galinor is the first of the heroes of the Glaurung not to be represented by a Lord of the Rings figure. This resin figure is from MierceMiniatures and was apparently part of their recent kickstarter. It was given to me by a friend who had no use for it. Originally, I hadn’t intended to include a character like Galinor in the crew, but one must accept the unexpected on such long quests. 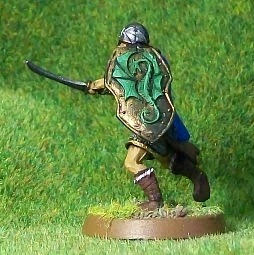 There aren’t that many miniature lines that fit well with the Games Workshp's Lord of the Rings range. Most figures are far too large and bulky, but this guy seem to fit right in well enough. The only thing I didn’t like about the figure was his sword, which was disproportionately huge. So, I cut it off and replaced it with the blade with Wargames Factory plastic orc sword. Thankfully, it glued on perfectly. Careful examination of the figure shows that Galinor’s sword no longer matches his sheath, but I can live with that.

I actually found the figure extremely difficult to paint as I just couldn’t see the detail in a lot of places. They just seemed to disappear under the spray primer. Still, I’m happy enough with the paint job. Happy enough to have him join the crew. 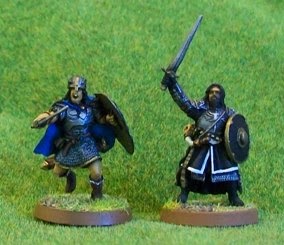