Robin of Sherwood - Returns in Audio! 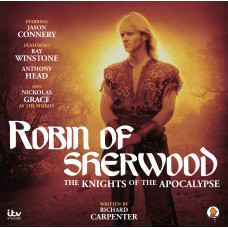 How did I miss this?

It appears one of the greatest, and most underrated, fantasy shows of all time is returning in an audio drama!

For those not in the know, Robin of Sherwood was a British-made television show that ran for three seasons in the mid 1980s. It aired in the USA on PBS. It was a gritty and grimy show, in which Robin 'the Hooded Man' was the chosen soldier of Hern, god of the forest. While most episodes featured Robin taking on his traditional foes, the Sheriff of Nottingham and Guy of Gisborne, over the course of the show he would also battle a necromancer, a coven of witches, and other slightly horrific fantastical foes. The show had its issues, especially its sometimes dodgy soundtrack and lighting, but for a fantasy fan in the 80s, it was one of the best things going. A few of the episodes are pure genius.

Anyway, thanks to a crowd-funding campaign, it looks like they've gotten the whole cast of regulars back together to do a two hour audio drama. Okay, I'm not sure about the title, The Knights of the Apocolypse, but it is still exciting news.

I would love to read some reviews of this or hear from anyone who has a copy!
Posted by joe5mc at 05:19