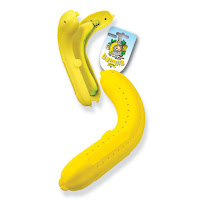 It has now been just under a month and a half since I set myself the 50 Banana Challenge, and I am disappointed to announce that I have only managed to eat 14 bananas. Partly this is a result of baby chaos, but mostly it comes from the difficulty in keeping bananas in stock in the house. I turns out that my wife and daughter really like bananas so they just keep disappearing!

Despite this, the experiment is already yielding results. I really had to choke down the first two bananas; the texture was just so disagreeable to me, but after about the third, this just kind of went away. It's not the greatest food texture in the world, but it ain't that bad. I'm still not a huge fan of the flavour, but I don't hate it. So, I suspect the remaining 36 will fall soon enough.

I have also discovered two other important things. 1) Bananas are really cheap. I mean really cheap. I'm sure this won't come as news to most people, but I just never realised how inexpensive bananas were compared to most other (admittedly tastier) fruit. 2) Bananas are great for filling up an empty stomach. After my 8.5 mile cycle to work, I'm often ravenously hungry, and I haven't found anything else this side of a bacon sandwich that satisfies that hunger like a banana.

Finally, for those that are considering making more of bananas in their own lives, I have to recommend banana armour. My wife bought this silly looking thing many years ago. It really is great for keeping your banana safe on the move. The last thing I want when I get to work is a battered and bruised banana - this sucker really does keep them safe. Also, in the years my wife has been using it, she has found a grand total of 1 banana that didn't fit in it.  Recommended!
Posted by joe5mc at 03:07