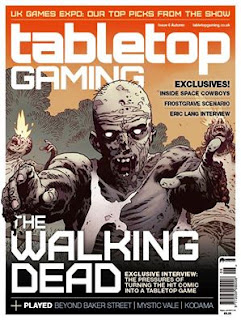 For all of you Frostgrave completists out there, issue 6 of Table Top Gaming Magazine includes an exclusive Frostgrave scenario (written by yours truly) called 'The Failed Breed'. It is a two-player scenario, set down in the breeding pits and includes a new monster, the barbed-thrasher.

The last time I included a scenario in TTG Magazine the issue sold out very quickly (I'm not saying that was the reason, but I won't argue against it either...), so if you want one, it is probably best not to wait around. I think the magazine goes on sale in a couple of days. Alternatively, you can order a copy direct from their website.  Electronic editions are also available.

Also now available is issue 86 of Wargames: Soldiers and Strategy, which includes 'The Warriors of Athena', my little solo wargame of Greek Mythology which uses the Frostgrave core system.

It's just a coincidence that both of these articles are coming out at the same time as I wrote them months apart. I hope people enjoy them!
Posted by joe5mc at 04:41