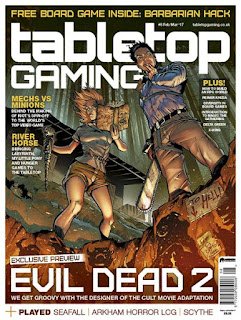 The problem with being a Renaissance Troll is that I am very easily distracted. A few months ago, while I was really supposed to be working on something else, I instead designed a quick-play, solo, dice-based, board game which I called 'Barbarian Hack'. The premise is the player is a barbarian who has a few turns to kill off all the monsters and rescue the prisoner. A game takes about 2 to 3 minutes to play.

I liked it, but it was such a small affair in terms of scope and rules I wasn't sure what to do with it. However, I spoke to the new editor over at Tabletop Gaming Magazine, and he was keen to have a look. Well, some months later, and I am a published board game designer!

So if you fancy giving Barbarian Hack a try, pick up an copy of Tabletop Gaming Magazine Issue 8, grab a couple of six-sided dice and some coins or figures, and you are ready to go!
Posted by joe5mc at 08:12