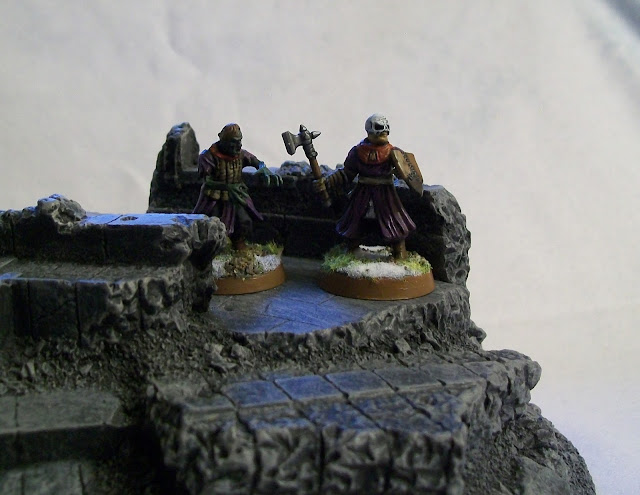 I haven't painted many Frostgrave figures lately. Partly this is the result of my continued battles with my eyesight, partly a lack of time, and partly a bit of lingering frustration. The truth is, the last time I painted up some Frostgrave figures, I wasn't happy with the results. After awhile, I realized it all came down to basing. 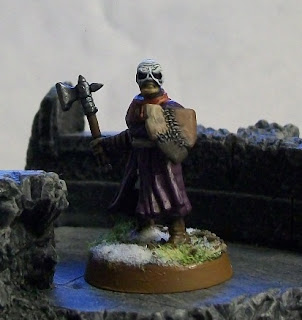 When I first wrote the game, I worried about the setting. I thought it was pretty cool, but I also knew that a lot of miniature gamers hate putting snow on their figure bases. Actually, I also hated putting snow on figure bases. It's not that it doesn't look good, but that it is limiting. The figures just won't look right on a lot of table tops. You'll never want to use them if you are fighting in the desert or the jungle.

I needn't have worried. Wargamers are practical folk. People that wanted to put snow on their bases did. Others just ignored that part of the setting, and did whatever they wanted on their bases. However, when I came to paint my first Frostgrave figures, I thought I had to be 'true' to the setting, otherwise I'd feel hypocritical. The first figures I painted had full snow bases. This looked terrible, like figures standing on a pile of cotton. Next I tried to do flagstone bases similar to the bases painted by Kev Dallimore on the figures in the book. Of course, my skill with a paint brush doesn't come close to Mr. Dallimore, and again it looked pretty terrible.

So, this time, I decided I would use my regular basing technique, a mixture of fine gravel, flocking and static grass, and then just add a little touch of snow here and there. I am much, much happier with the results. Okay, my Frostgrave has a bit more grass than I imagined, but so be it. Also, I now feel that these figures could also be used outside of Frostgrave, at least in a few colder locations. 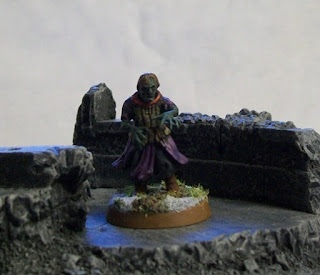 For anyone else who is suffering from 'base indecision' when it comes to Frostgrave, you have my blessing to use whatever basing technique, and look, you want.

So here are the first two figures to feature my new basing, a death cultist and a zombie. The death cultist actually features an arm (the one with the hammer) from the barbarian box. I really like this figure. He came out looking rather heroic. Even evil has its heroes, I suppose.  The zombie I'm not as keen on. I feel like I lost control of painting him at some point. Still, he's a zombie, so I won't worry about it too much!
Posted by joe5mc at 11:47