Doctor Who: The Marian Conspiracy 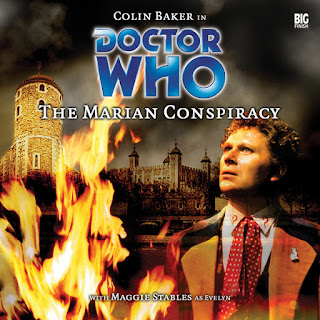 The Marian Conspiracy is a beautiful example of the 'heart' that has kept Doctor Who relevant and popular for over fifty years.

Despite being the sixth instalment in Big Finish Productions Doctor Who Audio series, and the second to feature Colin Baker's Sixth Doctor, it is really a new beginning. For one thing, it goes back to the series' roots with a solid, historical adventure, designed to both entertain and educate. For another, it introduces a brand-new companion, the history professor, Dr. Evelyn Smythe (played by Maggie Stables), who will go on to be one of the best companions in the histor of the series. One of the mistakes of Colin Baker's short television run was the companions he was paired with, both of which tended to accentuate his worst traits. Dr. Evelyn Smythe, an older, more experienced, and wiser companion than almost any seen in the series before helps bring the Sixth Doctor down to a more human level.

And that is the real key here. With this story, there is significant shift in how Colin Baker plays his Doctor. Yes, he's often still arrogant, bombastic, and egotistical, but these come only as little flashes now and then. Instead, it feels as though he has 'grown up'. He's a little wearier, a lot more introspective, but most of all, he has a lot more heart.

In truth, The Marian Conspiracy is a bit short on plot. When you boil it all down, not a lot actually happens over the space of four episodes, and yet the listener is pulled along anyway. It is the setting that shines here. Tudor England, in the midst of its horrific religious upheavals is a wonderful, if challenging, place to set a Doctor Who. The writer, Jacqueline Rayner, doesn't pull in punches in presenting the setting, but nor does she (or, more importantly, The Doctor) take sides. The Doctor never supports cruelty, but nor is he quick to judge either. He knows how history must play out, and he is sympathetic to its actors...however, being the Doctor, he will occasionally go a bit off the script of time, just a bit around the edges, if it means saving a life or two...

So, if you've ever thought diving in to the Doctor Who Audio Adventure Range, this is a good place to start. Also, it is such an old one now that you can download it from Big Finish for a mere £2.99. It's good value entertainment.

As another reviewer said, 'Practically faultless, the one reason this isn't getting full marks is that Evelyn's adventures get even better later'.
Posted by joe5mc at 03:51