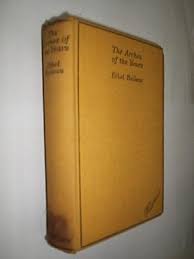 In parts of Spain and France, people used to leap out of cathedral bell towers with the bell cords tied around their wrists and trust to the momentum of the ringing bells to pull them back in.

How's that for an attention-grabbing first line?

I recently finished reading The Arches of the Years by Halliday Sutherland. Back in the early 1930's the book was a best-seller in Britain; now it is almost completely forgotten. Essentially it is the autobiography of the first half of Sutherland's life, and although he isn't particularly famous, he did lead an interesting and adventurous life. He grew up in the Highlands amidst a culture that freely mixed superstition with Calvinism. He went to medical school at a time when he had to capture stray cats to practice anatomy. He voyaged with a whaling ship, first practised medicine in Spain where he 'attempted' bull-fighting, he dabbled in the stock market, served on an armed merchantman in World War I, and then returned to Britain to run a mental hospital.

The book is written in a refreshingly honest and open style, and it is loaded with interesting details (Who knew that whale bones were used to make fake feathers as far back as the fourteenth century? You didn't think those were actual feathers on knight's helmets did you?).

One note, particularly, caught my eye. While travelling in Spain, Halliday went to Seville, where he witnessed a group of bell ringers leaping out of the top of the cathedral bell tower and swinging around on the bell ropes. This bell tower was nearly 300 feet above the ground!

I must admit, I'd never heard of anything like this, and it seemed to stretch credibility a bit. I did a quick internet search, but couldn't find anything on it. Still curious, I dropped an email to an acquaintance of mine who happens to live in Seville, the talented artist who goes by the name aRu-Mor. She explained that she wasn't native to Seville and was unaware of the tradition, but that she had heard of a group of acrobatic bell-rings in a nearby city. She did a bit of asking around and discovered a couple of amazing things. The first is the video below. Okay, they don't actually leap out of the tower, but they do leap up onto the bell and lean out of the tower! (Skip to about 4:50 to see the move).

Pretty amazing, but not quite proof. However, Ru-Mor also pointed me to this Spanish blog which looks into the question. It includes these rather amazing little pieces of art that come from near the beginning of the twentieth century. 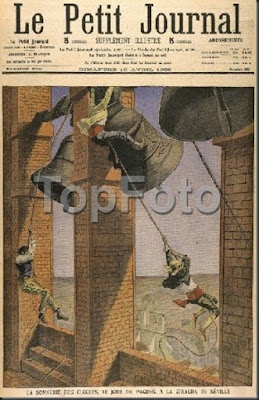 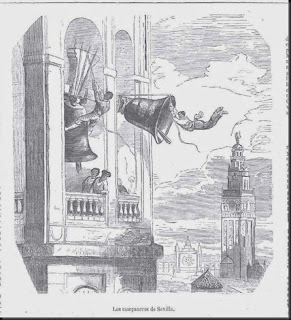 That's got me pretty well convinced. As it turns out, I once wrote a fantasy short story in which the ringing of 'Spanish Bells' played a very big roll. More on that soon...
Posted by joe5mc at 05:29