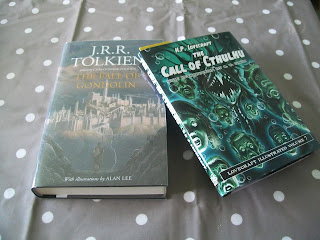 Yesterday was a good book day, as I received books from two, undisputed genre masters. First I received my pre-ordered copy of The Fall of Gondolin by J. R. R. Tolkien. As soon as I got it out of the package, I removed the dust jacket and put it in a Brodart ‘Just-a-Fold’ book jacket protector. I first discovered these back when I worked at a rare and used book store in Chapel Hill, and have been using them for my most treasured books ever since. They are a bit fiddly to apply, but otherwise, I can’t recommend them highly enough.

I’ve only had a quick flip through the book, but it looks good. It’s 300 pages, of which the ‘original tale’ takes up about 80. The rest of the book covers the writing, evolution, and related bits of the story, including pieces of other and earlier versions.

The book also includes several new paintings by Alan Lee – including ‘Glorfidel and the Balrog'! Though my favourite is the one repeated on the back cover, ‘Ulmo Appears Before Tuor’.

A few hours after that arrived, I also received a package containing The Call of Cthulhu from The Pulps Library series from PS Publishing. This slender volume (approx. 120 pages) contains the full text of H. P. Lovecraft’s master work, ‘The Call of Cthulhu’, along with an introduction by Lovecraft scholar S. T. Joshi as well as several associated essays by other well-known names in the field. The book is liberally illustrated by Pete Von Scholly. It’s part of a series that appears to be covering all of Lovecraft's tales in individual volumes. Intriguing, to say the least.

Expect full reviews of both books in the near future. Now, which to read first...