Purity Seal – I’m done with you! 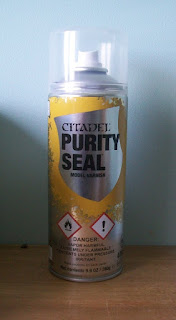 For nearly twenty years, a light spray of Citadel ‘Purity Seal’ has been the finishing touch for every figure I have painted. Normally, I would paint about five figures, and then spray them together in a little batch. Every so often, however, something went wrong, and the figures would be ‘frosted’. At worst, this looked like an actual layer of frost covering the miniature, at best it dulled and blurred the colours. It was frustrating when it happened, and there were factors that could lessen the probability of it occurring, but in the main, I just considered it a necessary risk in painting.

Well, over the last year or two, it seems that more and more of my figures have been suffering from frosting, and I don’t think I’m the only one. Just google ‘Purity Seal Frosting’ and you’ll see what I mean.

Looking for an alternative, I sent an email to Jamie Gordon, who is best known in the wargaming world as the author of Outremer: Faith and Blood, a fun skirmish wargame set in the crusades. Jamie is also responsible for painting the Frostgrave demo figures used by Osprey Publishing. Having recently played with these figures again at GenCon, I was impressed not only by the paint job, but by the sealer. The sealer, whatever it was, seem to really preserve the colours underneath and also appeared to provide a better level of protection than Purity Seal. If you really want to test your paint jobs - use the figures for a weekend full of demo games!

Jamie told me that he uses Army Painter ‘Anti-Shine Matt Varnish’ on his figures, so I decided to give it a try. It comes in a little dropper bottle and has to be painted onto the figures. I’ve recently tested it out on a few figures, and I’ve got to say, I’m very pleased with the results. The varnish adds just a tiny bit of shine to the figures, which I think actually enhances my paint jobs, but otherwise doesn’t change the colour at all. Also, it feels like a much stronger level of protection.

It’s early days in my use of the Army Painter varnish, but I’m happy enough with the results that my Purity Seal is headed for the bin! (Or however it is I am supposed to dispose of aerosol cans these days.)

Just so people don't think this is an anti-Games Workshop post, I am still happily using Citadel Chaos Black primer as the first step in painting all of my miniatures, and very happy with it.

((Update)) As some readers have pointed out, Games Workshop dropped 'Purity Seal' in favour of 'Munitorm Varnish'. I don't know if this is more than an name change or not. I have used Munitorm a bit and had some of the same problems. So, for now, I'm going to try paint-on varnish, to see if I continue to get better results.