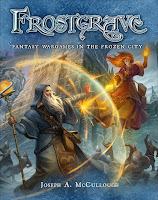 After nearly four years of continuously working on the world of Frostgrave, there is a lot of stuff out there. To help those who might be a bit confused, or fear they might be missing something, I have compiled this list, which I believe contains everything I have worked on that is currently available. (Please let me know if you seen something I have missed). This list is always available on this blog by clicking on the Frostgrave tab in the bar above. I will do my best to keep it up to date!

Frostgrave: Thaw of the Lich Lord (Campaign and Expansion)

Frostgrave: The Frostgrave Folio (Rules for Captains, A solo/co-op campaign, a couple other campaigns).

Frostgrave: The Grimoire (Spellcards - Includes all Spells from all Supplements)

Frostgrave: Tales of the Frozen City (Fiction Collection - Not by me!)

Frostgrave: Second Chances (A Novel by Matthew Ward contains an exclusive scenario written by me)

Frostgrave: Oathgold (A Novel by Mathew Ward contains an exclusive scenario written by me)

Standing in the Eye! (A charity scenario)

Troll Hunt (A scenario for wizards who think they are so tough...)

Extra Content for Above Article (Posted on this Blog)

Scenario: The Bridges of the Mal Dreath (Tabletop Gaming Issue 3, Reprinted in Spellcaster 2)

Planar Storm (Miniature Wargames #405 [Scenario for use with Forgotten Pacts])

[The link for this on the Wargames Illustrated Pages seems to be broken at the moment.]

The Catacombs of the Evrenbright (In Spellcaster: Issue 1)

Ghost Archipelago: Tales of the Lost Isles (Fiction collection, include exclusive scenario by me)