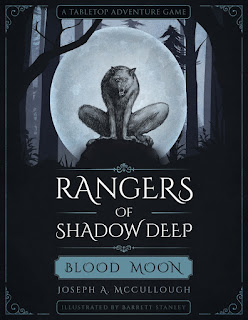 Werewolves have descended on the isolated village of High Rock, leaving death and destruction in their wake. Separated from their usual companions, the rangers must rely on a group of auxiliary soldiers to lead them to the village, help fight the werewolves, and hopefully rescue any survivors. However, as the rangers investigate the scene, it becomes increasingly clear that one of those auxiliaries is hiding a deadly secret…

Rangers of Shadow Deep: Blood Moon is a mini-expansion consisting of a one-scenario mission. It includes profiles for four unique companions, two new monsters, and full rules for becoming infected with lycanthropy.

Blood Moon is designed to be played with rangers level 0-5 or 6-10.

Blood Moon is set to publish in PDF this Wednesday on DriveThruRPG.com. The PDF will cost $3.50. A print edition is in the works, but likely won’t be ready until the new year; the price has yet to be determined. The print edition will include a free PDF, so if you want both, you might want to wait. I will not be doing a retroactive discount this time as it is just too much work when we are talking about such small amounts of money.

Truth be told, I didn’t plan to write Blood Moon. It all started one day when I was admiring some werewolf models from North Star and trying to come up with an excuse to buy them. This got me thinking about how I could write a classic werewolf horror/mystery scenario for Rangers of ShadowDeep. I developed some mechanics, but realized I would need to include a ‘list of suspects’, which meant I needed to rework how companions would work for the scenario. Also, since I had werewolves, I might as well include some rules for lycanthrope. As it turned out, the project became a great little game-design challenge, and I’m very happy with the results. Thankfully, Barrett was able to help out again with a bunch of new artwork, and Steve once again provided the design.