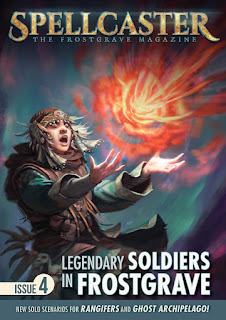 Need a little more Frostgrave fun in the run up to Christmas? Well, here you go. Issue 4 of Spellcaster Magazine is now available!

Issue 4 can be purchased now on DriveThruRPG. It can be pre-ordered on Kindle, where it will be released on Friday.

We are working on the print-on-demand version, but this likely won’t be ready until the new year.

All back issue are still currently available.