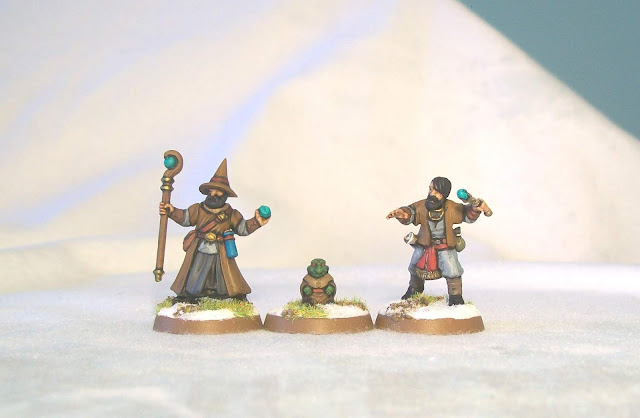 There is a rumour going around that a plastic wizard set is coming to Frostgrave. Well, the rumour is true! I actually received a 'test sprue' a couple of weeks ago. It was just a sample, and there was still some cleaning to do on the mold, but I just couldn’t wait! There are so many fun bits on the sprue, I just had to clip some out and have a play. Here is the result!

My new wizard, Nicholas Nicodemus and his apprentice Porthek!

Nicholas is made completely out of pieces from the sprue, including one of the four bodies. I gave him a staff in one hand and gem in the other. The gem is obviously some kind of power stone. I also glued on a couple of extra potion bottles, of which there are many on the sprue. For his apprentice, I used a body from the Ghost Archipelago Crew sprue, just to see how compatible they were. The head and the arms come from the wizard sprue. I gave him a magic wand, as I figure you don’t get a staff until you’ve made ‘full wizard’. I also attached a couple a pouch, a potion, and a scroll as well.

Oh, and that little familiar/imp thing? He’s on the sprue too! 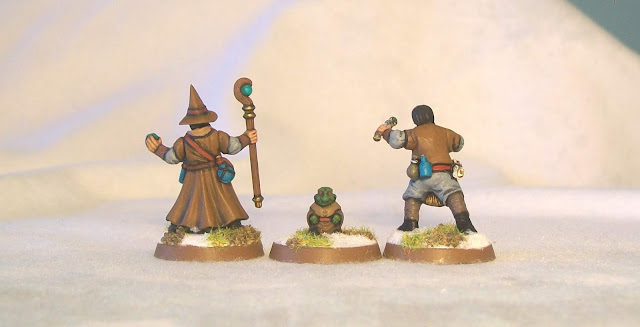 The Wizard Box set is due out March.  It will retail for £15 and contains two sprues. Each sprue allows you to make 4 spellcasters with loads of customization options and extra bits!
Posted by joe5mc at 06:25