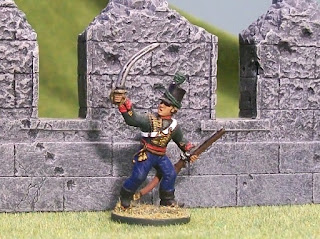 Today I thought I would share a couple of memories from my early days of working at Osprey Publishing as well as my first recorded attempt at writing a wargame!

Although it is hard to believe, when I first went to work for Osprey Publishing some 13 years ago, I was the only wargamer on the small staff of 24. While Osprey books had long been connected with the wargaming hobby, and some even had small wargaming sections in them, Osprey as a company wasn’t directly linked to the larger industry. That all changed shortly after my arrival, when Osprey teamed up with Slitherine to produce Field of Glory.

With this new direction, the Osprey bosses thought it would be a good idea to increase the overall staff awareness of wargaming and, being the only one on staff with a hobby background, I got the call. I was asked to run a wargame in the office for as many of the staff as wanted to try it out. While this sounded like fun, it also presented a major problem.

Having emigrated to Britain only the year before, my available collection of figures was rather limited. It was certainly not enough to accommodate the dozen people in the office who wanted to try it out. Instead of doing the sensible thing and scheduling a bunch of small games, I set about assembling the easiest 12-player game that I could. Thankfully, I was big into 1/72 modern soldiers at the time, and these not only came 50 to a box, but painted up quickly and easily. It only took me a couple of weeks to assemble two forces of about 50 guys each plus some tanks. I divided each force into six units and was ready to go.

At the time, the Osprey staff room contained one of the largest tables I have ever seen. Seriously – I couldn’t reach the centre of that table from any side without leaving the ground! Okay, I have short arms, but it was still a massive table. I always wondered why it was originally built, and now I’m curious as to what become of it, as it was much too large to fit into most people’s houses. Regardless, it was a wonderful wargaming table, even if I didn’t have any kind of cover that could go over it. I did, at least, have a bit of model railroad terrain, and I supplemented this with a bunch of rocks and sticks from just outside the office building. It all made for a decent set-up.

When the day finally arrived, an even dozen Ospreyistas assembled around that table. Can you imagine running one wargame for 12 people, none of whom have ever wargamed before? It sounds like chaos, and perhaps it was, but everyone was there to learn and have fun, and I think they did. I used a card activation system, with each card linked to a unit, and stole most of the rest of the mechanics from Warhammer 40K because they were simple and only involved d6s. Many 1/72 soldiers died that day.

I don’t know how much the other employees took away from that day, or if it had any effect on Osprey in general, but soon thereafter Phil Smith joined the staff. Phil was also a wargamer and would go on to have a huge impact on the development of wargaming at Osprey. He currently serves as Head of Osprey Games.

Together, Phil and I tried to continue the wargaming education of our colleagues and had an open invitation for anyone who wanted to join a little circle of painting and playing. We decided to go with Napoleonics as these are great figures to paint and highlight the connection between Osprey books and their hobby use as painting guides. I think we had about six takers, and I can still remember organizing that first order from Front Rank where we all picked out five or six figures we wanted to paint.

Now, of course, the problem with Napoleonics is that they are generally associated with ‘big battle’ wargames and, at the time, I was unaware of any small skirmish rulesets that would be appropriate. So, I set out to write my own.

These days, I’m often asked: “did you write any wargames before Frostgrave?”, and I generally say “no”. This is true, in the sense that I never wrote a complete wargame before Frostgrave, but it was not my first attempt. That came those many years ago when I started work on a little ruleset called The Oxford Front.

The idea behind the The Oxford Front was that Napoleon successfully invaded Britain in 1808 and pushed all the way inland to Oxford. (I chose Oxford partly because of its distinct architecture, but mostly because that is where Osprey is based!) There, his offensive ground to a halt due to long supply lines, trouble at sea, and attacks from elsewhere. Thus, the ruins of Oxford became a no-man’s-land, where small parties of skirmishers launched raids, sniped at one another, and attempted to ‘liberate’ the treasures of Oxford. I guess, now that I think about it, there is a touch of ‘Frostgrave Napoleonic’ to it!

As it turned out, most of our little circle never finished painting their figures, and none seemed very interested in actually playing a wargame. We played at least one large game, and Phil and I played a couple more. But soon the group drifted apart, and The Oxford Front was forgotten. Phil and I went on to push wargaming in Osprey through the publishing schedule more than the education of our fellow employees. Phil has turned Osprey Games into a real force in the wargaming industry; in fact, I suspect Osprey now publishes more different wargames than any other company. I, meanwhile, turned my attention to writing a fantasy wargame set in a Frozen City.

Then, not too long ago, I was going through some old files on my computer, and discovered one labelled The Oxford Front. It was all of the rules I had ever written for the game. It is not complete by any means, but there is enough there that the game can be played with a little work and imagination. I present those rules here without modification (other than cleaning up grammar) because I know if I were to start working on them, I would end up writing a complete game, and that’s just not something I have time for at present.

I think they serve as an interesting marker as to where I was as a game designer ten years ago. More, I think they are a fun footnote to my career at Osprey and the development of Osprey Games. I hope you enjoy them.

Players alternate turns. Each turn, every soldier in a player’s unit is able to perform two actions. Actions consist of movement, shooting, reloading, and special actions. A soldier may not perform the same action twice in the same turn, but is otherwise free to take any combination of actions in any order desired. Soldiers are not required to take two actions and may take one or none. Soldiers should take their actions one at a time, with one soldier completing all of its actions before the next soldier takes his actions.

Infantry Soldiers may move up to 6” in an action. This is reduced to 4” if any of the movement is across rough terrain or over an obstacle. After a player has moved all of his soldiers, any soldiers in base to base contact with enemy soldiers automatically fight.
Note: If an enemy soldier is already in base to base contact with a friendly soldier, a second soldier can only be moved into contact if there are no other unengaged soldiers within movement distance.

A soldier with a loaded weapon can shoot at any enemy soldier within its line of sight and in range of its weapon. Roll a d10. If the result is greater than or equal to the firing soldier’s shooting score, then a hit has been scored.
Note: this roll is never modified.

When two opposing soldiers are in base to base contact at the end of a player’s turn, they automatically fight. Both soldiers roll a d10 and add their fighting score. The soldier with the higher total scores a hit on his opponent. No hits are scored in the event of a tie. If one side has more than one soldier in base contact, that side may roll a d10 for each of the models, pick the best one, and add the highest single fighting score of his soldiers engaged in the combat. If this score beats the opponent, one hit is scored. If an uneven fight is won by the side with only one model, the player may choose which enemy soldier takes a hit.

Once a soldier shoots, place a marker next to the model to denote that it needs to reload. The model cannot fire again until it takes a reload action.

Save Modifiers for shooting

Save Modifiers for fighting

Soldiers with hero points may spend one point at any time in order to reroll a die. Any die roll can be rerolled any number of times, provided the soldier keeps spending hero points. If the reroll is worse than the original roll, the original roll may be kept but the hero point is still spent. Soldiers can also use hero points to seize the initiative!

Note: Extra actions gained through seize the initiative can be used to take any action, even if it is an action that the soldier has already performed with his regular actions. Thus, it is possible for a soldier to shoot, reload, and then shoot again with an extra action.

A Unit consists of one or more officers (Captains and Lieutenants) and a number of Sergeants and Line Infantry. Starting Units have a Reputation score of 50. This Reputation may be used to purchase and upgrade soldiers.

Each Unit may have one, and only one, Captain.
Reputation: 18
Shooting: 6
Fighting: 5
Save: 7
Hero Points: 5
Equipment: Sword

Each Unit may have 1–3 Lieutenants
Reputation: 13
Shooting: 7
Fighting: 4
Save: 7
Hero Points: 3
Equipment: Sword

Each Unit may contain a number of Sergeants equal to 1 plus the number of officers in the unit.
Reputation: 10
Shooting: 7
Fighting: 4
Save: 7
Hero Points: 3
Equipment: Halberd

Each Unit may contain a number of Line Infantry equal to 2 times the number of Hero Points possessed by its officers.
Reputation: 7
Shooting: 7
Fighting: 4
Save: 7
Hero Points: 0
Equipment: Musket & Bayonet

A soldier may have as many skills as he has Hero Points, or one, whichever is higher.
Sharpshooter: If a 10 is rolled for shooting, the enemy save is given a -2 modifier.
Tap Load: A soldier may reload and shoot with the same action, but will only score a hit on a roll of 10. Note, Tap Load is considered a special action. It may not be taken twice in the same turn (except in conjunction with seize the initiative), but does not prevent the soldier from taking a shoot or reload with his other action.
Fencer: When fighting with a sword, this soldier gets a +2 modifier to any Fighting Saves.
Tough as Nails: This soldier recovers from being wounded on a roll of 6+

Out of Action Roll

------------
Thanks to Phil Smith for his input and providing photos of the French and the Portuguese, two of the original The Oxford Front Units.