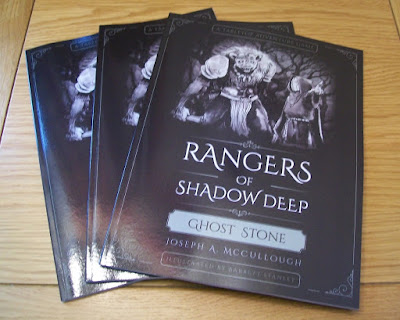 Ghost Stone, the latest book in the Rangers of Shadow Deep series is now available as a PDF and print-on-demand!

If you are unsure if you need this is your life, I have included the introduction to the book below to help you make up your mind.

Welcome to Ghost Stone, the latest supplement for Rangers of Shadow Deep. This book is divided into two main sections. The first section presents a new mission with four scenarios. Unlike previous missions, this one is designed to be played by two different ranger groups of differing levels. Scenarios 1 & 3 are designed for level 0–5 rangers, while scenarios 2 & 4 are designed for rangers that have reached levels 10–15. Each of the scenarios has an effect on future scenarios, and the whole mission is structured to show how different ranger groups sometimes work together to complete a task that is too complex for one to handle alone. I did, briefly, worry about writing a mission that would force players to create a second ranger, as I know how people get attached to their characters. However, I figure this mission gives players a chance to use their main ranger in the higher level scenarios, while creating a new ranger for the lower level ones. Plus, I’ve come to realize that most players take the need for a new figure as an opportunity! As an added bonus, the mission potentially gives players the chance to bring back some older companions that may no longer have a place in their main ranger’s party and use them to support the new ranger. One of the scenarios also calls for the rangers to work with a unique companion, who can potentially be used in future missions, assuming she survives…
The second part of this book is called ‘The Weapon Hoard’. Not long ago, I went to the British Library to see a special exhibit on the Anglo-Saxons. The exhibit mainly contained ancient manuscripts, but there were a few other items as well. One of these was an Anglo-Saxon seax. The word means ‘knife’, but most people would call such a large weapon a sword. What was peculiar about this seax was that it had bronze wire beaten into the blade so that it spelled out a name. No one knows if the name belonged to the creator, the owner, or was actually the name of the blade. Looking at that beautiful ancient weapon, I realized how important a unique weapon can be to a legendary hero. King Arthur, Roland, Strider, the Grey Mouser, they all had their own named weapons that accompanied them on their adventures. 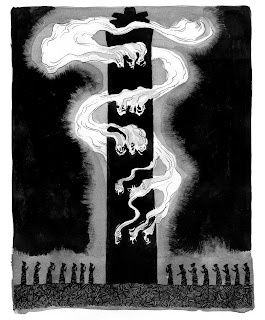 I decided in that moment that I wanted to give Rangers of Shadow Deep players the opportunity to find unique weapons with their own special abilities and their own mysterious pasts. After all, the Shadow Deep has existed at least as long as recorded history, and in that time it has swallowed an unknown number of lands. Many of the weapons of those lands will likely have survived, either left buried in the rubble, or recovered by the minions of the Shadow Deep. So, ‘The Weapon Hoard’ is essentially a list of 52 unique weapons that can be found during your adventures. Hopefully, this will bring a little more narrative, a little more mystery, and a little more fun to your games.

As I’ve continued to work on Rangers of Shadow Deep, I’ve come to realize that there are two types of supplements, or, at least, two types of missions: those that carry forward the main narrative, such as the main rulebook and Temple of Madness, and those that are part of the greater war but not driving the central narrative forward, such as Blood Moon. Ghost Stone fits more into this second category. While it covers some large events, it really serves more as a side-quest. It keeps us in touch with the ongoing conflict, but can essentially slot in anywhere during the story. Going forward, I hope to continue writing both kinds of missions, to keep the story rolling, but also to provide players with adventures that they can work into their stories at any time.

Once again, a big ‘thank you’ to everyone who has bought the game and otherwise supported my work. I continue to get a huge amount of satisfaction out of developing and experimenting with the game, and my ability to do so is largely due to your support. I hope you enjoy this new supplement, and, if you get the chance, please share the results of your adventures on the Rangers of Shadow Deep Facebook page, on Board Game Geek, or on one of the great miniatures forums.
Posted by joe5mc at 06:16