Back in the Mags (with Ghost Archipelago!) 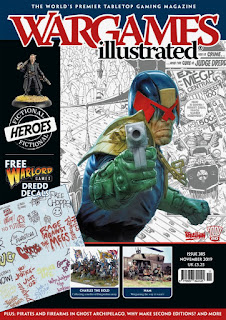 My summer of writing magazines articles continues to pay off in this month’s Wargames Illustrated, Issue 385. In fact, I’ve got two pieces in this issue.

The first is a new Ghost Archipelago scenario I wrote at the express request of the magazine’s owner and editor, Dan Faulconbridge. WI is releasing a cool new ‘Captain Flint’ miniature and were looking to place him in a scenario. As a huge fan of Treasure Island, I just couldn’t resist, even though the character doesn’t really belong in my fantasy world. So, in this scenario, the Heritors come across Captain Flint just after he’s buried his treasure and killed the crew that helped him. Of course, the crew aren’t quite as dead as the players might want…

As part of the article, I also allowed WI to reprint my black powder rules for Frostgrave and Ghost Archipelago that first appeared in Spellcaster: The Frostgrave Magazine #1.

My second piece in the issue is a discussion of ‘new editions’ of games. Having spent over a decade working in the industry, in several different capacities, I have completely changed how I think about new editions, and I thought other people might enjoy an insider’s take.

There are lots of other interesting items in the issue, especially if you have any love for Judge Dredd…

You can get your copy directly from Wargames Illustrated or from North Star.
Posted by joe5mc at 02:19