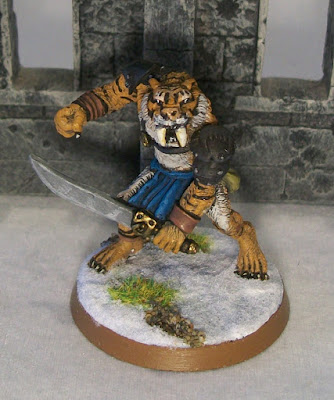 Okay, I’m just going to come right out and say it – I’m really proud of my paint job on this mini!

I bought this guy for no better reason than that he is completely awesome (which is the best reason of all, if you ask me). It is sculpted by Jason Wiebe, who has always been one of my favourite sculptors of big, hairy monsters.***

I later realized I could work him into my new Frostgrave warband. He’s a big guy, and needs appropriately big stats, so I decided I would use him as a ‘bear’ animal companion. That makes him large and fearsome, but does mean he’s a little too focused to stop and pick up treasure…

Down the line, when gold is aplenty in the warband, I will probably upgrade him into a Barbarian so he can carry treasure and an item, but we’ll see.

At first, I thought I was going to give him a simple, mountain-lion style paint job. But, when I picked him up to paint, I just thought ‘go for it, man!’ I looked at a couple of painted examples on line and figured, I can do a tiger… 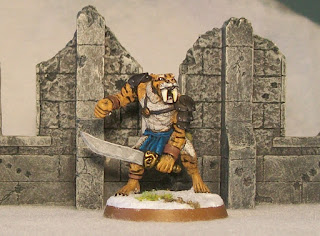 I probably spent more time on this figure’s head, than I have ever spent on a figure’s head before. Partly, this is because the head is big enough to really concentrate on details, and partly because most of those details had to be painted free-hand. So, so pleased with the finished head.

Also of note is the blade of the sword. I painted it ‘semi-metallic metal’, that is, I mixed just a drop of silver into grey. I’m not quite sure why I did this… I just felt like that much metallic wouldn't work when the rest of the figure is so organic. Anyway, it seems to have worked out nicely. 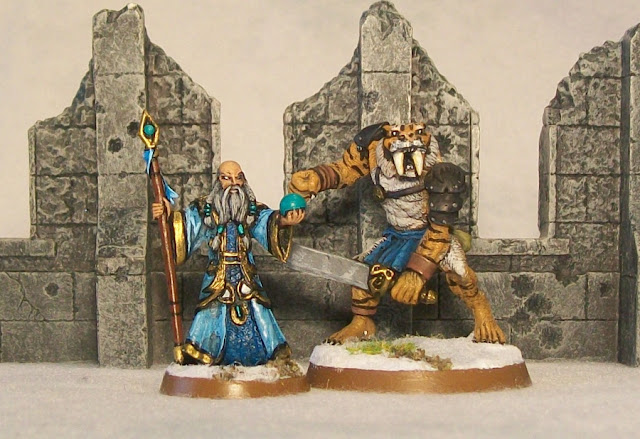 *** I actually wrote this blog post yesterday. This morning, I was surprised to see that North Star has released images of the 'Cronohound' miniatures that will be released for Frostgrave: Perilous Dark, and they just happened to be sculpted by Jason Wiebe! I honestly didn't know he was part of the project.
Posted by joe5mc at 02:36