Frostgrave for the Win! 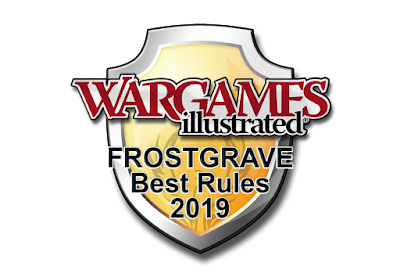 In a truly unexpected event, Frostgrave has won ‘Best Rules 2019’ in the Wargames Illustrated awards! This is especially gratifying as the winner is decided by public vote.

Really, it’s pretty astounding that a game that has been out for 4.5 years, and that has a second edition on the horizon, would win such an award. Back then, I never imagined that people would still be playing the game many years later, much less hold it in such high regard.

I think it is a real testament to the community that has grown up around the game. It’s just so full of people who take a fun-first approach to the hobby.

Many thanks to everyone who voted for Frostgrave!

I don’t believe the full list of winners has been released yet, but I’ll be interested to see who is there!
Posted by joe5mc at 04:12