The Death of John Stewart Walker 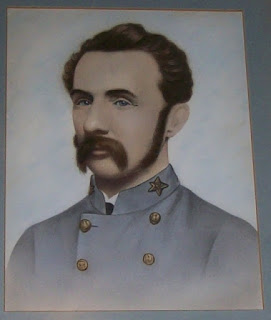 Over the last few years, I have been doing some low-level research into the history of my Civil War ancestors. One of my greatest discoveries was a first-hand account of the death of my great-great-great grandfather, Maj. John Stewart Walker, who led a company in the 15th Virginia regiment. The account is written by J. Staunton Moore, one of the men of his command. Although this account was written forty-five years later, and likely coloured by those intervening years, the few particulars do match up with all of the other facts I’ve learned.

The account is part of a larger piece about the battle of Malvern Hill, which was published in the Southern Historical Society Papers, Volume XXXV. (Reprinted by Broadfoot Publishing Company, Morningside Bookshop, 1991). At the point where this excerpt picks up, the 15th Virginia, along with the rest of its Brigade, has been called out of reserve and sent forward to take a Union position on top of a hill.

‘…About one hundred and fifty of our regiment reached the base of the hill, in command of Major John Stewart Walker, formerly captain of the Virginia Life Guard, of Richmond (Company B), who assumed command as soon as Colonel August was placed hors de combat. Here we rested, under severe and continuous fire that did not admit of our raising our heads from the ground. As twilight was deepening into the shades of night, the word was passed down the line to prepare to charge the crest of the hill. Major Walker stood up with drawn sword and flashing eye and gave the command, “Forward, charge!” It was the last word this gallant officer ever uttered. He fell, and was dragged into a little branch which flowed at the foot of the hill and expired in the arms of his brother, Captain Norman Walker. Thus perished as brave a soldier as ever flashed his sword in any cause!’

You can see all of the research in my Civil War ancestors on my other blog: What Colour is Butternut?.
Posted by joe5mc at 05:11