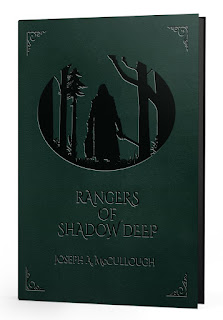 So, what is going to make this ‘Deluxe’, I hear you ask? Well, to start off, it’s getting top-notch production – traditional printing and binding, with a faux leather cover heat stamped with the artwork and text, and high-quality paper stock. The layout is being completely reworked, and the book will feature a dozen pieces of new artwork by Barrett Stanley. Additionally, I’m taking the chance to incorporate the character building elements (most notably the spells) from Temple of Madness into the main rulebook, so that all of the character building will be in one place. I am also updating or modifying a few of the rules that I, and others, have been playtesting. Finally, I have introduced a ‘challenge level’ for each of the scenarios in the book, which increases the difficulty of each scenario. This is for those that were finding the scenarios too easy for 3 or 4 players, for those who just like their games tougher, or for those who might want to play the scenarios again with higher-level rangers.

The creation of this Deluxe Edition will mean that not only is the game more attractive and easier to use, but that it will be available to the trade and hopefully obtainable from gaming stores around the world. In fact, you will be able to order your copy, along with you official Rangers of Shadow Deep miniatures from North Star. (In fact, it might be worth holding on to see what deals they might offer…)

Now, I’m sure some people are thinking, ‘I already own the rulebook, do I really have to buy another one?’  The answer to this is emphatically ‘NO’.  At the same time the Deluxe Edition is released, I will also be releasing a free, small ‘Rules Update’ document. This will include all of the changes and additions to the game that appear in the Deluxe Edition (except the material in Temples of Madness).  So, if you are happy with your book, and the game as is, you can just download the Rules Update and see if any of the new material interests you.

What does this mean for the supplements? Nothing. Except for the material from Temple of Madness that has been drawn into the Deluxe Edition, there are no plans at the moment for Modiphius to release any of the supplementary material. All of the supplements (and the original rulebook for that matter) will remain for sale on DriveThruRPG.com just as they were. Also, I will be continuing to support the game with new material in the old format – in fact, look for a new mini-supplement coming next week!

Rangers of Shadow Deep: Deluxe Edition is due to release in early February 2020.

If you have any questions, feel free to ask in the comments below, and I’ll do my best to answer.