Exciting news, Frostgrave fans! Today, Osprey has revealed the cover for Frostgrave: 2nd Edition! The next chapter in the saga of the Frozen City draws near! 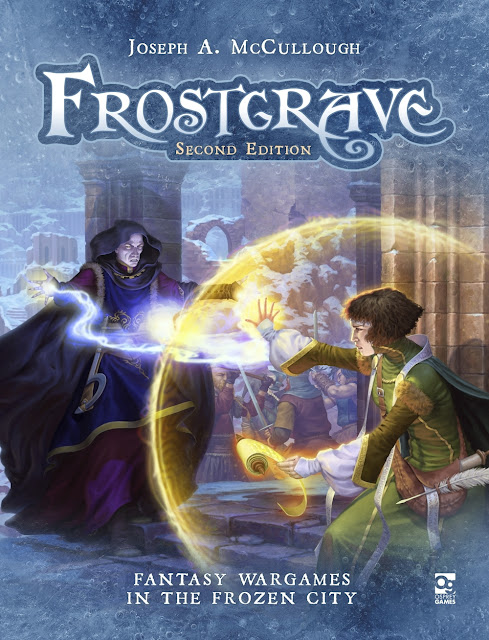 Personally, I love the way it harkens back to the original cover, and yet also appears bold and new at the same time. Now we’ve got the Necromancer and the Sigilist battling on the cover, showing off their new look!

Now, this announcement comes with some good news and some bad news. Sharp-eyed viewers might notice that the cover artwork is not by Kate or Dmitry Burmak who supplied all of the artwork for Frostgrave, 1st Edition. After six years of painting for Frostgrave, that wonderful pair have decided to move onto other things. However, Osprey will be celebrating their contribution by collecting all of their Frostgrave artwork into a single book, Frostgrave: Wizard Eye.

Obviously, the loss of the Burmaks was a huge blow, but when Osprey asked me who I might like to create the artwork for Second Edition, I already had an answer ready: aRu-Mor. If you’ve never encountered the works of this mysteriously named Spanish artist, you are in for a treat! I urge you to take a look at the artwork in Dracula’s America or Ragnarok if you have a copy to hand.

My connection with aRu-Mor goes back a long way. When I was the commissioning editor for Osprey Adventures, I recruited aRu-Mor and contracted her to work on her first Osprey book – Sinbad the Sailor. Since then, I’ve watched her artistic skills grow and grow, and have longed for the opportunity to work with her again.

I’ve now seen most of the artwork that aRu-Mor has produced for the new book, and it includes many, many stunning pieces. Although she has continued the colourful, adventurous style laid down by the Burmaks, she has also brought her own touch to the Frozen City. Her work is perhaps a bit more ‘earthy’, and just a touch darker perhaps. This will probably be more obvious in the internal pieces than it is on the cover.

In the near future we’ll be showing off some more of aRu-Mor’s work for the new edition, and I think you are going to love it. Her artwork is going to get you reaching for your paint brushes and shouting out for some new miniatures!
Posted by joe5mc at 00:29