The Engagement at Simmon's Bluff 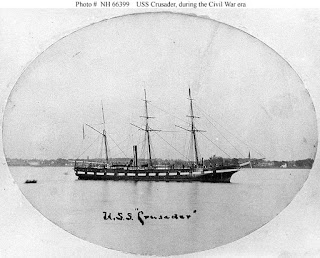 My great-great-great grandfather, Col. James McCullough commanded the 16th S.C. Volunteer regiment during the Civil War. While he wouldn’t see major action until 1864 and the battles around Atlanta, he was involved in at least one minor incident, known as the Engagement at (or Battle of) Simmon’s Bluff. Here is the official Confederate record of the incident.

Major: Herewith I have the honor to inclose the official report of Captain Parker, Marion Artillery, of the affair with the gunboats at Simmons’ Bluff on the 21st instant. Owing to the absence of the regiment of Colonel McCullough the rifle pits were not complete when the attack commenced. I am having them arranged and have strengthened the position with two additional companies. I would here state that I will forward the report of the engagement on James Island on the 16th instant as soon as I can collect the reports of the immediate commanders.
Very respectfully, your obedient servant,

Captain: I have the honor to report that at about 11 a.m. this day the alarm was given of two gunboats approaching. I was at Colonel Whaling’s place, on a visit to pickets there stationed, and caused the alarm to be given also from that point. My guns were in the road and wagons parked before I could get to camp, nothing having been lost. The boats approached rapidly – one large three-masted propeller and a side-wheel, probably the Planter.
I ordered the companies of Captains McJunkin and Barnett into the incomplete pits in the process of construction for rifleman, directing them if driven form the pits to fall back and skirmish (if they landed) along the road and in the corn back of Simmons’ negro settlement. The battery I ordered to the bluff, where I am erecting batteries for my guns about 800 yards above the point. The road through the corn was so miry from the recent rains that my guns could not use them, and I had to take a circuit and approach it from the north. When we cleared the road we found the large vessels just below the point, the Planter on the south side of said point. To reach the bluff I would have had my battery exposed to fire from both ships for 400 or 500 yards, and then would only be able to reach the large vessel at the range before named, say 800 yards. I deemed it wiser, as I could inflict no injury, to run no risk.

The fire of shot, shell, case shot, and canister was very heavy from both ships. I kept my men and guns under cover, anticipating a landing. The riflemen kept up a continuous and steady fire until their position was enfiladed, when they retreated to the road, straggling far ahead of their officers up it. I halted them and deployed them to the left of the road, directing a gradual advance, under cover of woods, hedges, and corn, to the negro settlement. The men were very much fatigued and I could not get the movement properly executed. A few men were landed from the Planter, I think, who got as far as the infantry tents and burned them. My pieces I had withdrawn to the causeway, as both boats, shelling vigorously, moved up as though to land above our position.
One of the scouts reported to Major O’Neill that the enemy had landed and were marching up. My guns were then thrown forward, and I detailed scouts from my own men, who proceeded to a point between the two camps, under charge of Lieutenant Lowndes. Two of my pieces were to take positon near the bluff on left of road, two in our drill ground on the right; Colonel McCullough who had arrived, to advance under cover of the hedges to the point where my scouts were with four companies; Major O’Neill, with the other companies, to advance through the corn – and thus I hoped, had they landed, to attack them in front and flank. They, however, had not landed any force, and I can only conjecture that they landed at all. Had the original intention been carried out, and the riflemen on leaving the pits occupied the road and the corn, I think we might have been able to bring our guns into play; as it was, I thought my best plan was to keep prepared for what I expected – a landing. Before we could reach the boats, however, immediately after burning the tents they turned and went rapidly off. The buildings at the point were much injured by shell, grape, cansister, &c., and some very narrow escapes were run.
The conduct of the men while in the pits was very good, and they all say that cries were heard after several shots. The men kept very close on deck. Had rifle pits been dug all along the banks I believe that the enemy would have suffered very much; as it was, it was very difficult to rally the men after leaving the pits. Very little time was given for a proper disposition of the troops. I do not think that over twenty minutes elapsed between the alarm and the first shot. Some system of signals is necessary by which we may be notified of the entrance of a vessel into the river while out of our sight. The lookout on the mast of the steamer enables her to direct her fire at objects not seen from her hull. Captains McJunkin’s and Barnett’s companies have both some baggage.
I have no casualties to report. One shot passed through my commissary room, but our stores were out of it. Lieut. [James] Salvo, of the Washington Artillery, came over, offering Capt. [George H.] Walter’s battery, and was of much service to me. I declined sending for the battery, as under the circumstances I did not think it could be advantageously used.
Respectfully, your obedient servant,
Edward L. Parker
Captain Marion Artillery, Commanding Post.

An official Union account also exists, which agrees with most of the particulars – though it notes that no casualties were taken, and that resistance was light. It is through that account that the ‘three-masted propeller’ is identified as the U.S.S. Crusader.

The Union had been hoping to cut the rail line into Charleston, but abandoned the attempt after burning the confederate encampment for reasons unstated.